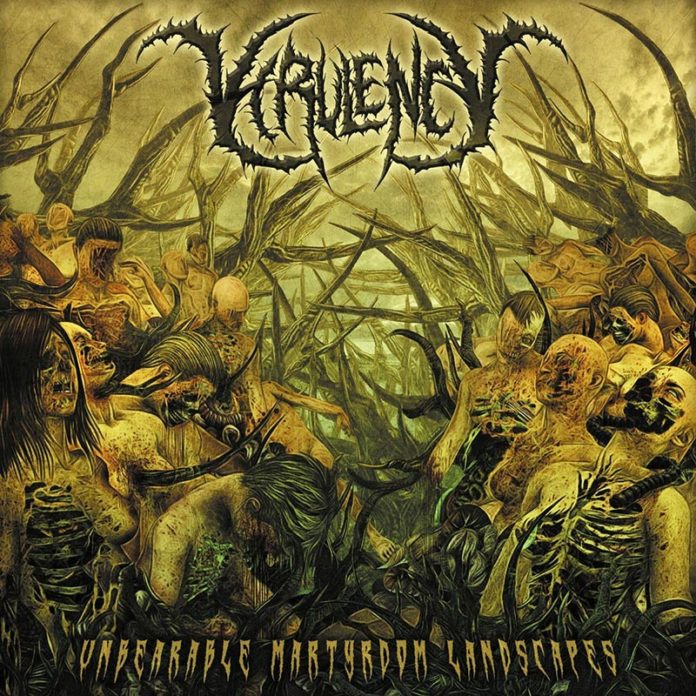 I will freely admit when I have been in contact with a musician whose band I examine underneath my microscope of brutality, and the times I have spoken with Jonathan (vocals) of Virulency have always been good, and he is a man that takes pride in the brutality that he creates.  Much like their fellow countrymen who are in Avgrunn and Carnivorous Voracity, Virulency tend to excel in creating heavy-hitting Unique Leader-styled brutal death metal.  This means that while their music is nothing ground-breaking, “Unbearable Martyrdom Landscapes” should at the very least be able to delivery on filling that craving for guttural and brutal death metal.

As soon as I pressed play and was greeting by the opening track, ‘Field Of Impaled Bitches: Inevitable Savagery,’ I was immediately given flashbacks to Matti Way-era Disgorge, and that is mainly due to the way that Jonathan performs his guttural demeanor.  In fact, all of the music here you can easily cherry pick influences from bands like the aforementioned group, as well as Deeds Of Flesh and Defeated Sanity.  Really, just pick a random brutal death metal act out of the hat and you are more than likely spot on.  Sometimes this can be a problem with some bands if they aren’t able to take that type of worship and apply it correctly, but Virulency do a good job of taking a little bit of everything from those bands and even adding their own Devourment-esque slams to it.

While the music on “Unbearable Martyrdom Landscapes” is competent for a traditional brutal death metal listener such as myself, I can’t exactly see Virulency winning over a lot of new-school fans with what they have, mainly because while the riffs are nice and thick, they may not be as adventurous as newer fans may like.  Sometimes the guitar tone does feel a bit weak when it’s side-by-side with the drums, but it typically isn’t too big of a problem.  The reason for that is because Virulency is a band that doesn’t like to play something twice like a lot of their brutal death metal brethren, making sure to always give you something new.  Tracks like ‘Architect Of Her Suffering’ and ‘Concupiscent Succumbed Disturbance’ are pretty standard brutal death metal fare, but the main tracks that stand out are ‘Field Of Impaled Bitches: Inevitable Savagery,’ ‘Unemotional Misogynism,’ and ‘Dissolving Vaginal Integument’ where Virulency as a whole shine for people who love a tried-and-true formula done to a ‘T.’

These sick Spaniards are very capable of creating chunky brutal death metal, and while this formula may feel stale to others, there is still a loyal following that would happily welcome Virulency with open arms.  If you like your brutal death metal to be chaotic in nature but traditional in spirit, then you should do yourself a favor and pick up “Unbearable Martyrdom Landscapes.”

Sunlight’s Bane -The Blackest Volume: Like All The Earth Was Buried