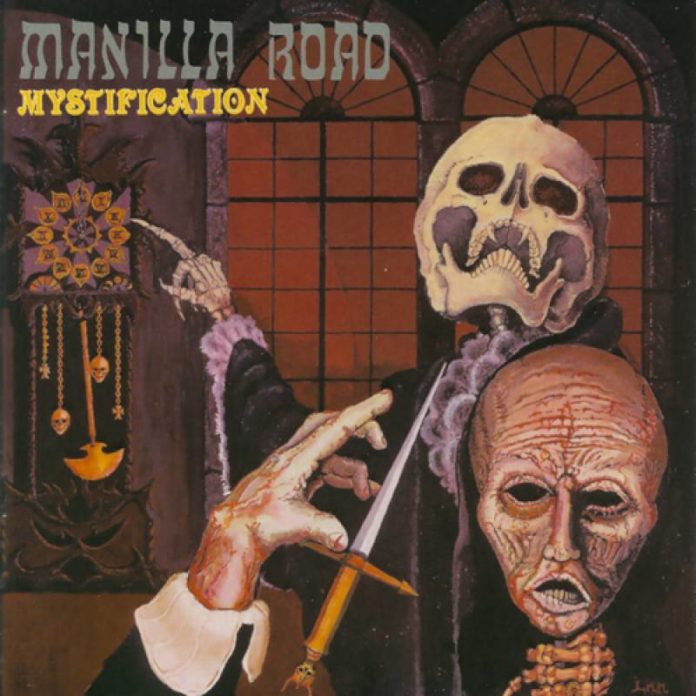 There’s a lot of things about Manilla Road that exemplify why exactly the eighties were the golden age of heavy metal. You can hear a lot of the evolution that was going on at the time when the band breaks in to one of their galloping speed metal sections. You can hear it in every character-filled note from vocalist/guitarist Mark Shelton. You can tell that this was recorded in a time when a world of possibilities existed in heavy music.

The first thing that a lot of people are going to notice about this re-issue is the production. It’s really no great update over the original sound of the album. It’s all clattery drums and shiny, echoing guitars. Though it is a technically “bad” production, it represents another reason why the eighties as a whole were a great time for metal. The underground was filled with albums that were produced poorly, but that gave every band and every album their own unique character. Few bands sounded exactly like other bands because few bands had the same textural styles applied to their work in the studio. This lent an even greater variety to everything being released at a time when you already had so many different kinds of material.

As I mentioned previously, Mark Shelton is one of the biggest factors in making this album sound unique. He’s certainly no technical wizard with his voice, but you can hear passion, you can hear power, and you can hear a genuine investment in the material. Mark is a guy that you could never accuse of “going through the motions”. He’s a fine guitar player as well, his riffs slashing the listener’s psyche with power that pours out through the dungeon-esque production. His solos are chaotic and cacophonous and the overall effect conjures images of the cheese-less, deadly serious early Manowar recordings, but with more metallic gusto and thrashing forcefulness. The drumming of Randy Foxe is also a high point, his rhythms alternately marching forward into oblivion or dive-bombing the charred landscape of these songs. You could almost call it scorched earth drumming.

The songs… if there’s anything that Manilla Road are known for, it’s big, epic, medieval songs. These are songs ripped out of the pages of dark fantasy, ripped from the imaginations of alienated schoolboys longing for different times and dangerous places: “Masque of the Red Death”, “Mystification”, and several other tracks here perform beautifully what the best metal always does: provide escape and adventure to the listener.

So it’s unique, but does it truly have a place in the 21st century? Does a Manilla Road re-issue have a place on store shelves and in people’s collections today? With the resurgence of traditional heavy metal as a viable force, I think that an album like Mystification is something important, something that needs to be heard. The young guns need to be reminded that not everyone needs to sound like Iron Maiden or Mercyful Fate, and of the handful of still functioning/re-united acts in this vein that could re-ignite the flame of true musical diversity in heavy metal, Manilla Road rides high. Stay tuned for new material from the band in the coming months.