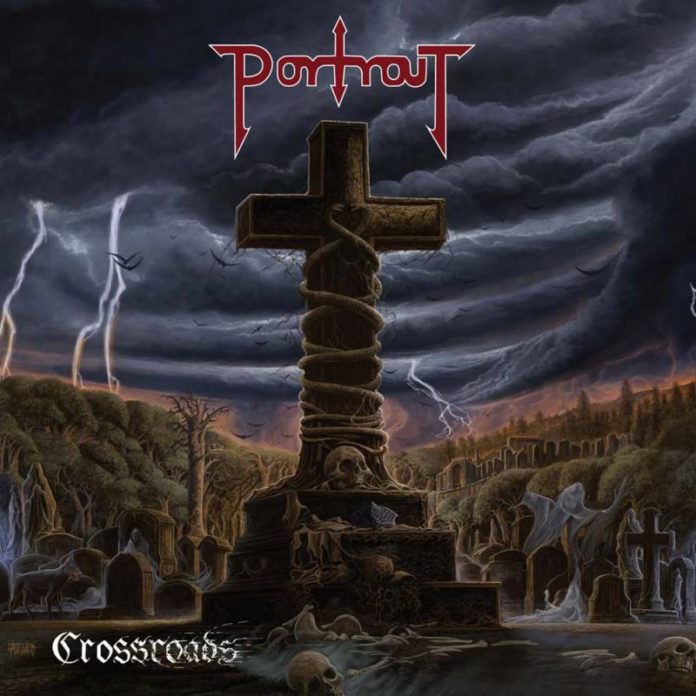 Heavy metal has become a blanket term for a wide range of sounds, and has broken into countless sub-genres, but at one time the term “heavy metal” described a very specific breed of bands. You had to have a loud guitarist (or two) that knew how to play lead and rhythm, a bass player and drummer combo that provided a strong rhythmic backbone, and a powerful vocalist that could cut through the wall of sound. Personally, when I hear the words heavy metal, one of the very first bands I think of is Judas Priest, who have influenced hordes of bands and have set the bar high for songwriting and skill in metal.

Crossroads, the third full length LP by Portrait, displays a sound reminiscent of Judas Priest, Mercyful Fate, and Blind Guardian, and has a classic heavy metal feel to it. “Liberation” starts things off with some soothing acoustic guitar work, which turns into a slightly more melancholy minor key mid-way through; fear not, though, for the next track, “At The Ghost Gate,” will put to rest any fears that this is a folk album. The main riff on “At The Ghost Gate” sounds like the kind of riff that Enslaved would write if they were to try their hand at putting out a power metal record, though with more lead guitar, and a more epic sound in general. Per Lengstedt’s vocals on this (and all subsequent tracks) show an impressive range and skill that puts him in the same ballpark as Rob Halford and King Diamond; “We Were Not Alone” is an excellent example of this, and is a stand-out track as well as my pick for the best song on Crossroads. Christian Lindell and David Olofsson are some serious shredders on the guitar, and use the tried and true twin guitar formula that both Judas Priest and Iron Maiden concocted back when this type of metal was being created. There are galloping rhythms, mind-bending solos, loads of melody, and an epic tone that is similar to Blind Guardian, amongst other like-minded power metal purists. Mikael Castervall provides some great bass lines, and has a few memorable moments on the album, like the bass riff on “At The Ghost Gate.” Mikael and Anders Persson (on drums) make their voices heard, and are absolutely indispensable as a rhythm section, providing a counterweight to the melodic guitar riffs.

Tore Stjerna, who has played in numerous bands including Watain, Funeral Mist, and Corpus Christii, has proven himself to be a wizard on the production here, having captured the spirit of heavy metal, circa 1970’s-1980’s. Everything sounds massive in the mix, but not so much that the tone gets muddied up; all the levels are set just right, so that each instrument can be picked out when listening. There’s a slight echo sound to the music, almost like it’s being filtered in from another era; this is really apparent in Per Lengstedt’s vocals, which have a little reverb, and are brilliantly overdubbed, thus accenting the absolute power have his performance.

Classic metal fans will find a lot to like here, and Crossroads would fit right in with vinyl collection that includes Stained Class by Judas Priest, Melissa by Mercyful Fate, or Tales from the Twilight World by Blind Guardian. Call Portrait heavy metal, power metal, speed metal, call them whatever you want, but do yourself a favor and pick up a copy of Crossroads, you’ll be banging your head and raising a horned fist by the time the 3rd track starts up.