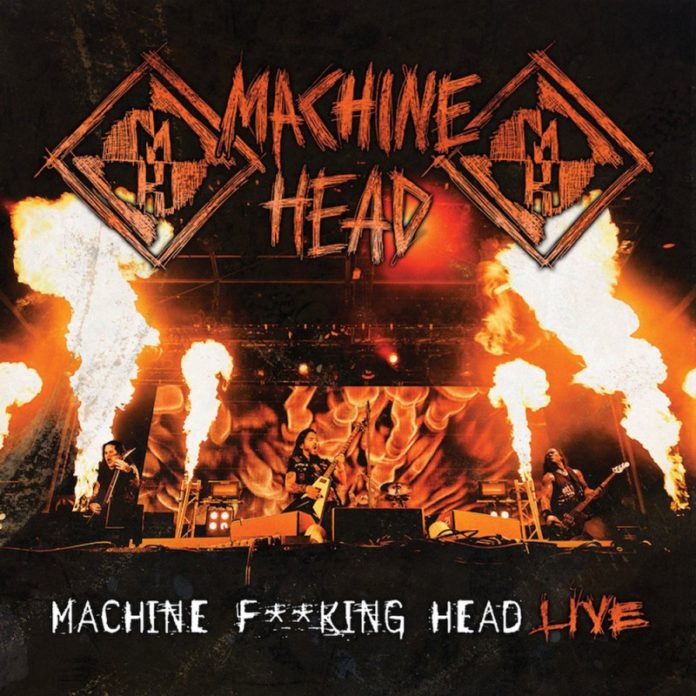 Live albums are a bit of a conundrum: they’re not regular albums, but the experience that they present offer a chance to really be there live with the band and the multitude of drunken super-fans you’ve heard all about. Now, the concept of what a live album is differs drastically from one band to another; Metallica ripped their entire live set from Mexico and Seattle respectively from their famed Binge and Purge live album/box set. While KISS, on the other hand did the same thing…only not really…more on that later. Machine Head’s new album Machine F***ing Head Live sort of falls into that category, and though it succeeds in providing a great music experience and Machine Head is as tight as ever, the album does flounder because of some spotty recording and questionable mixing.

So, remember me talking about KISS? Well, Alive! was their first foray into live recording and, while it was indeed recorded live, what you may or may not be aware of is that it isn’t really … live… kind of. Bear with me on this one. You see, KISS had set out to not only provide their salivating fans with a live version of their own songs, no sir, they set out to recreate the entire concert “experience” in audio form. What am I getting at? Well, Alive! was recorded over the process of several days and the best of each show were taken together and spliced into one live album. If the audience was louder on the left for the July 23rd show during “Firehouse” they would grab that and mix it in with the rest of the songs. Eventually, dubbing was used to mask up wrong lyrics and sour notes. Is the album really live? Depends on who you ask, it really divides people. Alive! strove to create a different impression if you will – an experience, as opposed to a plain old live album.

Machine F***ing Head Live fits into that type quite a bit.Though there isn’t any musical dubbing, as I’m sure Flynn and the gang are more than capable musicians, it’s just painfully clear that it Machine F***ing Head Live is recorded in multiple cities. Though that is advertised,  it’s not exactly presented like that on the tracks themselves; the chants of “Machine Fucking Head” rise at the end of each song as they transition into their next song, blending one song into another. Though this isn’t bothersome yet,  it becomes strange when in one track you’re thanking Glasgow and in the other you’re in Manchester. Again, it’s not a huge problem, but when you try to blend them seamlessly with fake chants, you’re trying to create the illusion of oneness, which is not the case. Had they just faded from song to song that would’ve been fine. In fact, they do fade out, but only once and then never again. They’re not even consistent.

Apart from that, Machine F***ing Head Live is actually a very good album. It’s without a doubt that Machine Head is in top form from end to end; the solos are spot on, Flynn’s vocals sound stronger than ever and the band works insanely well with each other on the tracks. In fact, most tracks sound better live than on their respective albums. Though the 2nd part is a little light on tracks (a scant 6 tracks compared to the previous 9) the album does feel more or less complete. Personal preferences make me wish that a few more tracks from The Burning Red (“From This Day” “Defy”)  The Blackening (“Now I Lay Thee Down” ) and at least one more track from Supercharger. And while the tracks that did make it on are performed insanely well, bad production rears its ugly head, and we’re face-to-face with the biggest problem the album has: simple engineering mistakes. At times, the crowd chanting “Machine Fucking Head” sound as if they were being recorded from a tin can, other times they sound fine. Why can’t it be consistent? Why can’t the guitars maintain a constant level so that the vocals are always clear? Isn’t that the reason that you’re recording it? So it can be tweaked later? .

In the end, it’s clear, Machine F***ing Head Live is full of great performances of (most of) your favourite songs, spanning more than 17 years, without a doubt it’s the strongest Machine Head has ever been, it’s just a pity about the production “hiccups”. Machine Head F***ing Live is full of elementary problems that should have been addressed in the mixing stage of production, and without a doubt is what holds this album back from being the quintessential fan experience. If you can get past that (and believe me, you will) you’ll enjoy the hell out of the album.