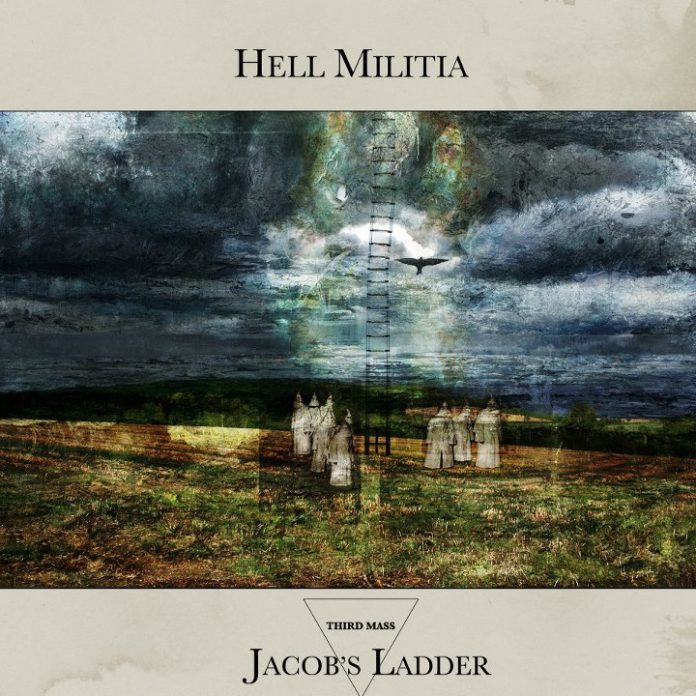 France; not a place that one typically associates with having a thriving metal scene. A somewhat unjust presumption considering that France has spat forth such class acts as Deathspell Omega, Blut Aus Nord and, in the more mainstream side of metal, bands like Gojira and Alcest. Upon first listen to Hell Militia’s newest offering, Jacob’s Ladder, it seems that this band, hailing from the French capital, are determined stand out from what most people see as a seemingly stagnant scene.

Shifting to the more widely recognised label Seasons of Mist from their previous label Debemur Morti Productions was definitely a good move to get the ball rolling, since the production is exactly what you would expect from a Black Metal band with any amount of credibility left. Vocalist Meyhna’ch gives a sterling performance, certainly better than in his newer project Sektetum. The guitars are crushing but clear, which really helps with sections that are more down tempo and atmospheric; at the same time, the use of a bombastic snare tone juxtaposed with a slightly over clicky bass drum sound gives them the classic ‘machine-gun’ drumming sound which is so essential in conjuring the really vitriolic overall sound which is oh-so-necessary in this sort of aggressive Black Metal. The best example of this is, definitely, the opening/title track, which sets up the listener for what they think is going to be a really ground-breaking album.

Sadly, it is not. Whilst having a fair few great moments, this album really doesn’t break the mould. At times it even verges on boring, most prominently in the track ‘Death Worship’; It’s slow, trudging, and sounds like a vein attempt to be creepy and feels, ultimately, like a filler track which probably should have been left off the album. What I did like about the album was their inclusion of quite a few samples of spoken words, where I think they achieved some of the atmosphere that they failed to attain in at the aforementioned track. Good examples of this are the “Black Projector” and “Second Coming of The Pig”.

Although there isn’t anything particularly wrong with this album, it didn’t really nail my feet down in the way Black Metal should. Even though it’s worth one listen, at the very least, since there are some really solid tracks in there, try not to get your hopes up when you first press play.[signoff predefined=”Signoff 1″][/signoff]