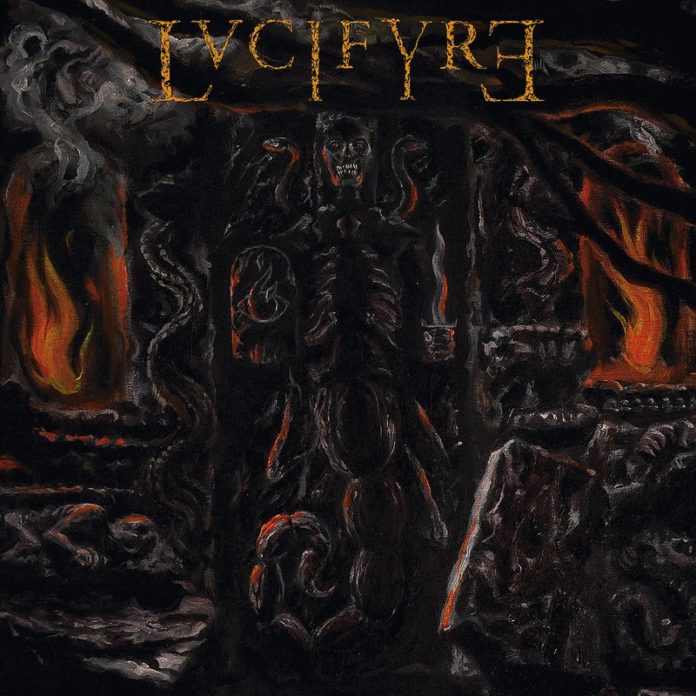 Marking their first release since 2014’s Svn Eater, the three-piece UK metallers of Lvcifyre pack four original tracks, plus a cover, into this EP. The band leads with the longest song, “The Greater Curse”, which lays in some atmosphere-building snorts and roars before launching into the kind of death metal assault that makes up most of this EP.

The intensity is ratcheted up and up, with screams, growing pressure from the din of strings, and a sharp-edged morass of bass broken by the drummer’s vicious action. As an opening track, it’s practically a belt across the face, and a blistering demonstration that the half-decade hiatus has done nothing to dull the band’s power. The outro flows right into the thrumming start of “Deaths Head in Crown”, which teases a few irregular bass drum poundings for tension. After some gurgling vocals intone something or other, a swell of volume drops right into further metal dervish, with a storm of fast-moving chords and hard-impact beats giving no quarter until the final moments.

“Shadowy Wing” continues in similar fashion, with a brief breath of relative calm at the start overturned into a riotous onslaught. At a minute and half, it effectively presents the EP in a micro scale, and it’s easy to imagine it being jammed into a number of metal compilations for sheer of the face-kicking to time ratio. With “Morderca”, pulled from the catalog of Polish group KAT, Lvcifyre apply their style to mid-’80s thrash with impressively natural-sounding (and high-powered) results, though the ending is a bit abrupt. Some sustain play at the opening neatly sections it off from the rest of the EP, but the bellows and rip-saw guitar keep the connection clear as day.

At twenty-four minutes of material, the band keeps things suitably brief for the level of aggression they bring to bear. Honestly, a full album at that level would be almost unlistenable without taking a break, but Lvcifyre hit a sweet spot, and certainly seem to know it. A great reminder that some of the players in the extreme end of metal are still finding ways to stay sharp, in the midst of so many who are willing to settle for what’s already been done.

Metal Blast is a completely ads-free publication, meaning that it generates ZERO revenue. Although it is a passion project for us, and we will continue for as long as we can, we would really appreciate it if you could sign up to our Patreon and  help us cover some of our server costs. Every penny counts! 🙂

THE BOTTOM LINE
Compact, intense, uncompromising, and metal as Hell.
Reader Rating0 Votes
POSITIVES
Powerful metal
Firmly focused song-writing
Incredible intensity
NEGATIVES
Despite the brevity, things do get repetitive, highlighted by the adherence to one overall song structure
The vocals are never decipherable, but that does work with the spirit of the music
4.5