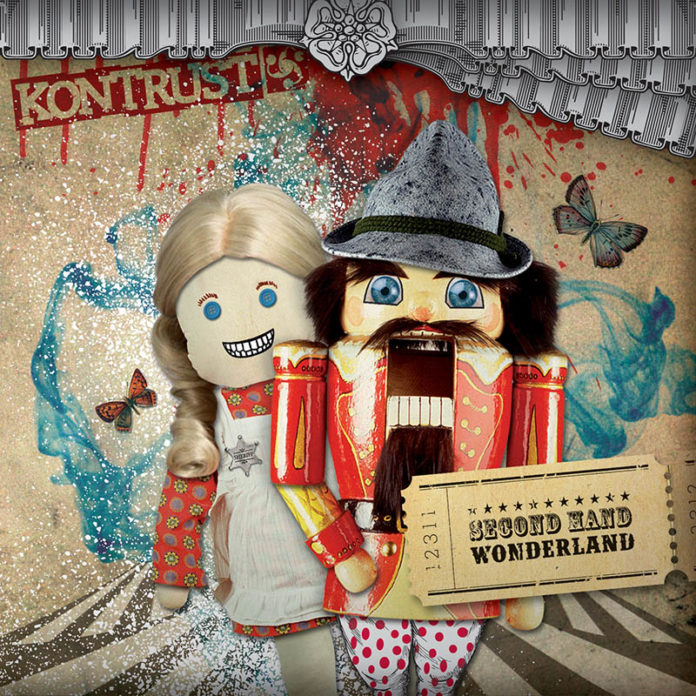 If you enjoyed Bomba, then this album will definitely blow your mind. Although fans will be satisfied anyway, this album will also appeal to just any lover of alternative metal/crossover music.

Since the release of Time To Tango back in 2009, Kontrust have become more and more noticeable in the European music scene, with crowded concerts, great chart positions and even earning the Amadeus Austrian Music Awards. They have everything needed to attract a wide array of audiences… if nothing else due to their inherent international flavor (an Austrian band with a Polish singer, Agata, dressed in lederhosen, singing in English and incorporating German and Slavic languages). While Kontrust’s music can be defined as “alternative metal” (simply for lack of a better term) they mix elements from reggae, rap, industrial, pop, disco, polka, jazz, punk and rock… and they somehow make it work!

Agata’s voice shines as powerful, yet sweet, reminiscent of Sandra Nasic from the Guano Apes, while Stefan (the male singer) displays an amazing range and diversity that allows him to move between genres (be it metal, reggae or rock) in a seemingly effortless manner.

Second Hand Wonderland is the kind of an album that you hum after just one spin. The songs are extremely catchy and yet surprising and unexpected, since as soon as you get accustomed to one, a new track changes everything.

The album opens with “Sock ‘n’ Doll” (also the first cut from the album, with an oddly-fitting sock-puppet video) a song in which Agata’s soft yodeling is quickly interrupted by Stefan odd singing style, going from an odd reggae-like style to growling. The song develops as a constant mixture of genres, styles and tempo (the term “avant-garde” wouldn’t be inappropriate) that even let you see yourself dancing to it at a concert. The band doesn’t lose its momentum and continues with “Falling”, this time introducing tribal elements (if I may call them like that) to the mixture (in a similar vein to the ones used, later, in the intro to the “Butterfly Defect”); although it has a more commercial sound (some may call it “radio friendly”) a solid track nonetheless.

“Monkey Boy” is, well, something else. Although the silly name probably catches your attention, for the wrong reasons, and makes you dismiss the whole thing altogether, don’t be too hasty. It is, by far, my favorite track in the album. With a clear electronic sound to it, the song is just an absolute mixture of everything under the sun. My first impressions after listening to it for the first time were along the lines of… “Is she singing about monkeys or boys? Was that Spanish? Is she imitating monkey sounds?!”

“U Say What” takes things in a completely new direction, in a much harder style, just like “adrenaLIN” which despite a “circus-ish” introduction, is one of the heaviest track in the album. The “circus style” is a recurrent theme throughout the album (I think I see a tent in the cover!) as it becomes apparent from songs like “Rasputin” (maybe even some burlesque elements here, between the calls to the “Russian people”) and “Hocus Pocus”, which begins with a side-show announcer and then continues with with a background of magician’s incantations and circus music (it also features one of the best chorus of the album, which makes it a good candidate for the charts).

“Bad Betrayer” is the kind of beach song that you definitely wouldn’t expect from Napalm Records (the sound is more pop and slightly commercial, so it’s very catchy, addictive and more than appropriate for parties and dances). It’s also a song that will be stuck in your head for days even if you only listen to it once. You simply won’t be able to stop yourself from humming and singing it.

As the album approaches the end “Raise Me Up” appears as yet another candidate for the charts; it’s a more straight-forward song, without so many odd changes, which makes it suitable for a wider audience. “Hey DJ!”, despite a name that would normally announce a dance song, is perhaps the heaviest track of the album.  “Police” closes the “Wonderland” with a fast-paced rhythm and an excellent opportunity for Agata and Stefan to show their skills. And they make the best of it.It’s clear that I really enjoyed this album. All I can tell you is that you should just give it a try.  Sure, if you’re a heavy metal purist, or you simply like heavy things (from Children of Bodom and up) this is not for you. But if you enjoy surprises, feel like dancing or just want to listen to “happier” songs, this is for you.