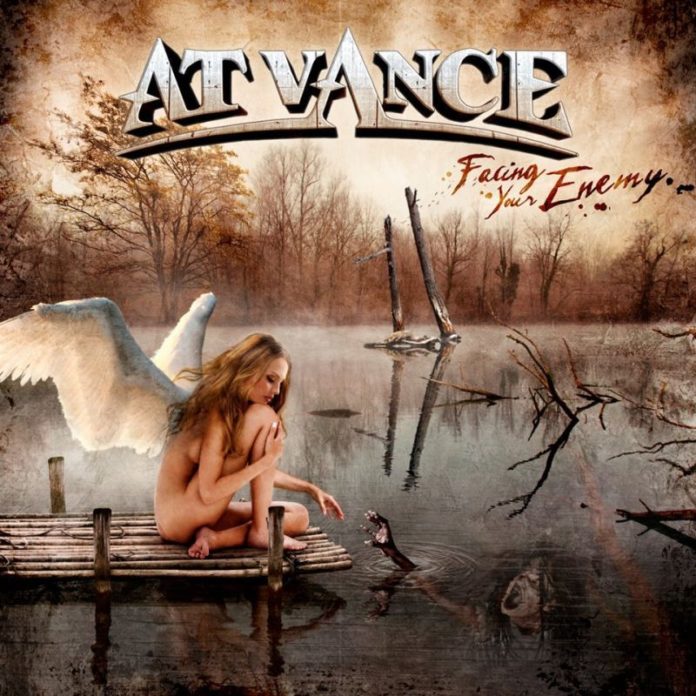 I’ve been a fan of At Vance for quite a number of years. It all started when I showed a friend the cover of Mozart’s “Rondo alla Turca” by Dragonland; she immediately told me to check out At Vance, since they had covered several classical pieces, such as Vivaldi’s 4 Seasons and Beethoven’s 5th Symphony. Having listened to those (great) tracks, I was surprised to see that the band wasn’t only a neo-classical ensemble but also a very talented Power Metal band.

Facing your Enemy opens with the fast-paced “Heaven is Calling” (I still can’t get used to the fact that it’s a fast song, since I keep thinking of “Heaven Calling” by Vision Divine which, as we all know, is a ballad). Rick Altzi delivers an incredibly powerful performance, clearly reminiscent of Jorn Lande (and I say this as a compliment) that opens up the appetite for what’s yet to come. “Facing your Enemy”, the title track of the album, as well as its first single, slows down the pace while, somehow, managing to keep you hooked; sure, the structure is not particularly complex (it relies on repeating the chorus over and over again) and is more a rock song than a metal one (which might explain why it was used as the first single) that shouldn’t take any points away from it, especially due to Olaf Lenk’s flawless solo (although his magnificent skills are evident throughout the album) .

“Eyes of a Stranger”, “Fear no Evil” and “Live & Learn” speed things up a bit, although at a different rate, with the former being more of a power metal track, the latter a heavy metal piece and the middle a slower melodic track. While they’re all undeniably good songs, they also suffer from a problem that, sadly, is commonplace in power metal: They’re not surprising or unexpected. This fact, which may be a good thing too, means that sometimes you feel that the band is just following the same pattern over and over, without really daring to try something new. But then again, if something isn’t broken, then you shouldn’t fix it.

In every At Vance album you find at least one ballad. Be it the amazing “Desperado” (covering the classic track by The Eagles) or the sappy “My Bleeding Heart”, the band has been very successful when it comes to this type of songs, actually managing to deliver sentimental pieces that don’t feel too over the top or downright ridiculous (think “Every Rose as its Thorn”, yeah, I said it!). In this occasion At Vance gives us “Don’t Dream” and “Things I Never Needed”. I’ll be honest, I find “Don’t Dream” boring. It’s a power ballad, no doubt about it, but it’s also unnecessarily long and as sappy as “My Bleeding Heart”. “Things I Never Needed”, on the other hand, is an acoustic sentimental ballad that despite the overused topic (i.e. “You broke my heart, so I don’t care about anything anymore!”) does manage to convey the right feelings (even though it feels as commercial as they come).

The 80s are present throughout this album. “See Me Crying”,  “Tokyo” and “March of the Dwarf”  are perfect examples of tracks that are just marked by the decade responsible for, among other things, my birth and glam rock (no relation between the two). Not bad songs, but they do seem a bit too 80s-ish.

So, all and all, where’s the power? Well, At Vance also knows how to please its base. “Saviour” and “Fame and Fortune” are just that, pure power metal. Great riffs, fast drumming and catchy choruses (with “Fame and Fortune” highlighting the neo-classical elements mastered by Lenk).

The verdict? It’s a good album, no doubt about it. At times you may find it a bit too “radio-friendly” but that’s not necessarily a bad thing (if you’re one of the assholes that say that if a metal band makes accessible music they sold out, please go fuck yourself). True, occasionally it comes off as repetitive and, in the case of “Don’t Dream”, forgettable, but those “flaws” are easily redeemed by the rest of the album.

Power Metal “purists” may find it “not power enough” but, in my opinion, it should satisfy most power and neo-classic metal fans, as well as a casual listener.