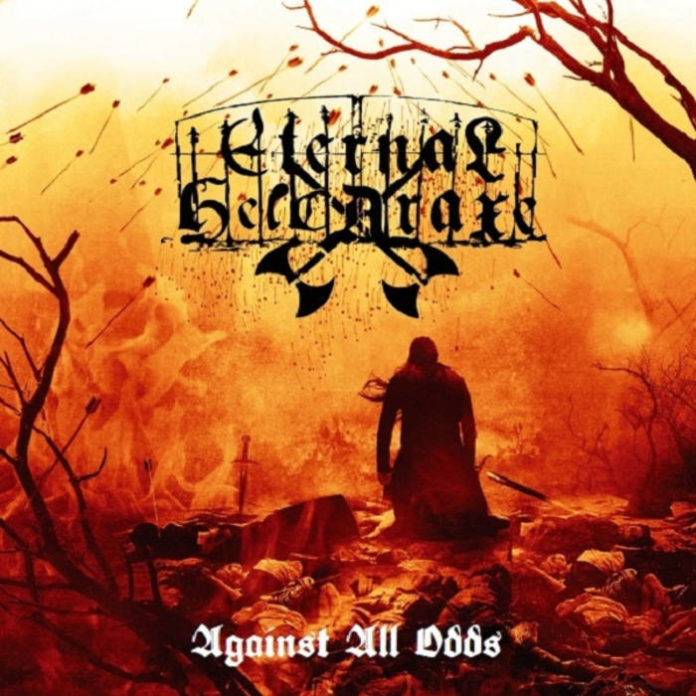 Don’t judge books (or albums) by their covers. Case in point: looking at the debut full-length by Ireland’s Eternal Helcaraxe, I was momentarily afraid I was going to be subjected to some folk metal abomination. (No hate for my folk-loving brothers, but you got to admit, not every band can be the next Eluveitie). I only turned out to be, like, 25-50% right. Against All Odds is a black metal record through and through, but it’s the triumphant, uplifting kind (ala Bathory circa Blood Fire Death), not the evil, grimy kind. And it’s a surprisingly accomplished effort, considering it’s the band’s first full-length.

One thing about black metal drummers-they can get away with a fair amount of mediocrity as long as they can roughly keep time at a high tempo, but a truly great black metal drummer is a sight to behold-look at legends like Frost or Hellhammer and you’ll know what I mean. They don’t take black metal’s vibe and style as an excuse to be lazy and avoid becoming legitimately skilled at their instrument. While drummer Tyrith isn’t quite on the level of those beasts behind the kit (sorry dude, but you’ve got one album to your name right now, give it some time), he certainly is on his way to following in their footsteps. When “One Stands Still Here” kicks in, he immediately dominates, rushing and blasting like a battering ram, but his slower beats are tight without sacrificing creativity. He leads the band through a series of battle hymns and triumphant odes to warriors of lore, acting as a solid backbone to the waves of grimy guitar chords and tremolo leads. Maybe it’s odd to start off discussing the music by commending the drummer’s technical prowess; I’m not one of those guys who feels the need to wax enthusiasm for technical prowess when writing about music, I just want to make a point of how strong the drumming is on this record, and how effective it is at keeping the music tight and cohesive. On tracks like “Shadow Of The Wolf”, this is especially an accomplishment-the track feels chaotic and fast without being sloppy. The latter-era Darkthrone d-beat feel during the verses gives way to the most enjoyable track on the album. It manages to pack in a great deal of intensity and power into its 4-minute runtime.

I found that I enjoyed the general “feel” of this album-it’s epic and battle-ready, managing to give it an air of excitement-but I feel I would be remiss in mentioning that it may be an acquired taste for some. For me, it rang triumphantly (throwing the horns in the air while listening to an album through headphones on your computer is always an accomplishment), but it lacks the grimness some may expect from their black metal. And while I enjoyed that feel to the music, I think the band could have taken better advantage of their vibe. The aforementioned “Shadow Of The Wolf” works because it’s short and has a chorus, and other songs could benefit from such a structure. When your music sounds as triumphant as this, some hooks and callbacks can only help your case. (I know, hooks in black metal? Scandalous!)

In the end, Against All Odds is a solid debut full-length from this Irish crew. Occasional moments of brilliance hint at what may come in the band’s future, should they choose to channel the elements that make their music enjoyable to me. Either way, it’s a pretty stellar jam for swinging a battle axe (or helcaraxe?) around.