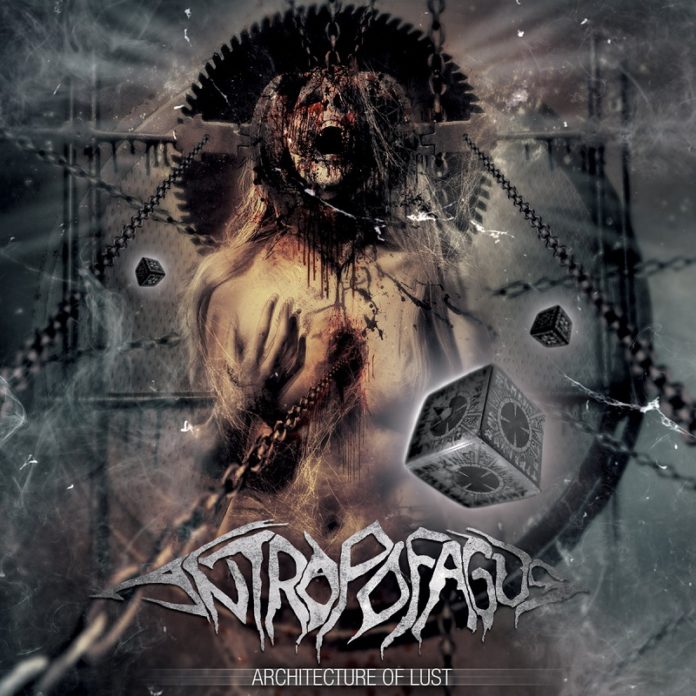 With only four releases under their belt, one would never expect for Antropofagus to have been in existence since 1997.  I first heard about this band last year when they appeared on a five-way split with Mass Infection, Putridity, Prion, and Infected Flesh called “Split Torso Trauma“.  Each band put two tracks on the split and I enjoyed Antropofagus‘s contribution far more than the others, particularly their song ‘Eternity To Devour’.  As I saw the obvious homage to the classic horror film Hellraiser in the cover art, I wished that the Cenobites would appear and give me that thrill of being torn limb from limb whilst headbanging to “Architecture of Lust“.  I have high hopes for this one, so please walk with me as I methodically dissect this slab of brutal death metal.

With nine songs that clock in just over thirty four minutes, Antropofagus are in no mood to take prisoners when it comes to “Architecture of Lust“.  The reason I say this is their style of Italian brutal death metal is very similar to that of Hour Of Penance and the aforementioned Putridity.  One thing that people should understand when heading into this album is that you should expect nothing but a relentless onslaught.

From beginning to end it does feel like the band is playing one very long song (with the exception of ‘Sadistic Illusive Puritanism’, which feels like an homage to the groovier side of Aeon).  Normally this would really grate on my nerves if you aren’t Bolt Thrower or Inhume, but Antropofagus does an exceptional job at making it all very interesting to listen to.  If there is one thing that the band certainly has going for them, it is the incredible speed that they repeatedly put on display, particularly due to the major talent of Davide “Brutal Dave” Billia (drums; Putridity, Septycal Gorge).  Another element that I found to be both entertaining and intriguing is the use of the flanger effect used on Tya’s vocals at some points, which always makes me think back to the classic Morbid Angel track, ‘Where The Slime Live’.

Even though “Architecture of Lust” gets a lot right, it also gets some things wrong.  First off, I already mentioned the lack of variation in the song-writing.  It really does not bother me too much, but there are times where I wish Antropofagus had been a little more adventurous.  I think this could be a real drawback for some people that aren’t as keen to supersonic brutal death metal like I am.  Second, it is the lack of bass in the overall mix.  The guitars, drums, and vocals are very thick and pronounced, but Jacopo Rossi’s bass is no where to be found for the majority of the record.  Even when you do hear him by his lonesome in ‘The Lament Configuration’, the tone is ridiculously weak.  I really believe the sound engineer could have done something about its presence, but the tone lays solely on Jacopo himself.  Third, in the beginning paragraph I mentioned the song ‘Eternity To Devour’ from the “Split Torso Trauma” album, and it should be noted that it was re-recorded for “Architectures of Lust“.  Unfortunately, I don’t think it has as much ‘bite’ to it as the original track did, but that’s just my personal taste.

All-in-all, “Architecture of Lust” is standard fanfare for brutal death metal that does have some good ideas throughout, but it isn’t something you will find yourself continuously coming back to, especially if you are looking for something that tries to set the bar higher than the rest.  I really can’t say anything more about it, so I will just leave you with this quote from Hellraiser that is rather appropriate:

“Explorers in the further regions of experience.  Demons to some, Angels to others.” -Pinhead