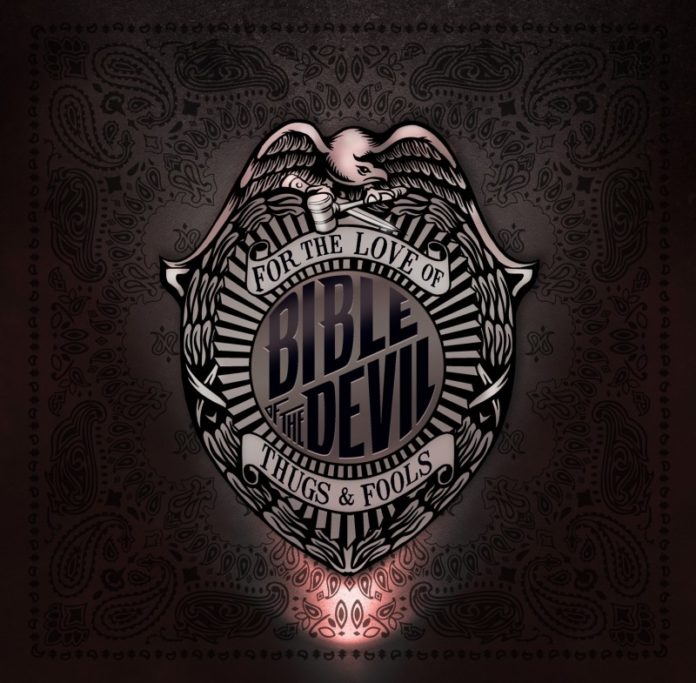 I wish I had a leather jacket…and a Harley…and a bottle of JD. Otherwise, listening to For the Love of Thugs & Fools without them just feels inadequate. Bible of the Devil has managed to sonically encapsulate the feeling of driving down a Detroit highway with nothing strapped to you but your hog. I’ve never actually been to Detroit nor on a motorcycle for that fact, but I’m sure this is how it feels.

For the Love of Thugs & Fools is without a doubt Motor City metal at it’s best. That’s not a genre, but it should be. In fact, I’m putting my foot down and officially making it a genre as of right now. Let me explain; Motor City metal is a wonderful genre that harkens back to that glorious time in the mid-to-late 70s and early 80s. Think of a mash up between Ted Nugent, Alice Cooper and KISS supercharged for today. The bands may not actually be from Detroit, but their place of origin matters as much as whether or not they have mustaches, but I digress. The supercharged throwback sound is found in bands like Valient Thorr, Priestess, and of course Bible of the Devil. Calling them stoner metal is incorrect as is slapping “alternative” on it and calling it a day. The feeling encapsulated by the balls-out-no-nonsense rock sound really is that of driving down the road a la Easy Rider, tossing caution to the wind as you take a hairpin turn on I-96.

The latest addition by Bible of the Devil rocks out for a full 45 minutes and hardly lets up long enough for you to fuel up your hog so you can continue on the road. The double guitar assault of Hoffman and Perry is as strong as ever and the dual guitar harmonies really hit the spot when the solos kick in. The production quality of the album balances itself in a very strange place; the guitars are especially gritty and grunge like as is the rest of the band. But, it seems all along the way special attention was paid to ensure a very decent mix. Technical abilities aside, what really makes this album shine are BotD’s attention to the hooks of the song. To such an extent in fact, that it you can actually sing along the first time around.  What’s funny about lead singer Mark Hoffman though is that he manages to sound like both Paul Stanley and Gene Simmons in the same song. It may not be on purpose, but it’s definitely there. On the note of KISS, this album really seems to reference Love Gun and Creatures of the Night rather often but luckily not to the point where they seem like a cover band, but rather as a solemn love letter to the era.

The entire unit shines on For Love of Thugs and Fools and one really gets the sense that the entire band is in it for the love of it. It’s a strange comment to say, but it’s something that clearly translates onto the record. As there are no stale tracks whatsoever, one can only assume that the members of the band are at least on speaking terms.

As far as downsides, there are few, if any.  There are a few songs that could have used a different track time. But it’s really a matter of mood and perception. I found myself sometimes wanting more from the band and other times, wishing they had stopped the song 30 seconds earlier.

Regardless, For Love of Thugs and Fools is a wonderful addition to Motor City metal genre and I can think of nothing better that’s come out in the last year to crank in your car as you rip down the highway. It may be a new genre, but I think it’s fitting and appropriate. Because if djent can be a genre, why can’t Motor City?[signoff predefined=”Signoff 1″][/signoff]