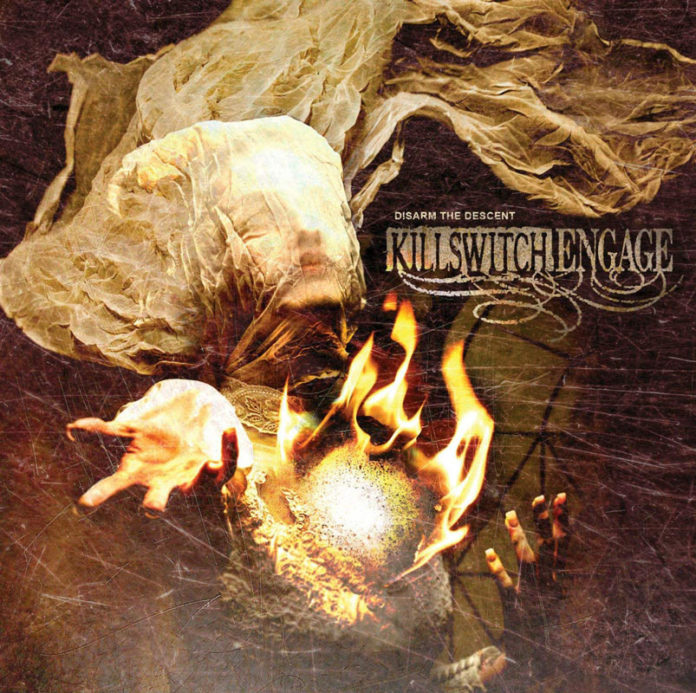 When a project like this lands on your lap, you feel it. Easily one of the hottest and most highly anticipated albums this year, Killswitch Engage return with Disarm the Descent.  I pick up the album with a heavy heart; it’s the end of an era an the beginning of a new (yet older) one. Gone are the very popular vocal stylings of Howard Jones, replaced with the familiar sounds of former lead singer Jesse Leach. Yet, even though I am familiar with both signing styles, I am apprehensive about listening to the album. Anyone that has heard the early KsE material featuring Jesse knows full well that the two singers had completely different singing styles, that’s part of the reason why people were so welcoming of Howard; his vocal range and tonality were completely beyond what Jesse had previously offered. Nobody is saying that Jesse was at all a slouch, but his approach was more of an angry punk rock than anything else. Howard, on the other hand introduced a new level to the entire mix. With all of this in mind, I listened to Disarm the Descent not knowing what to expect, but maybe that was for the best.

What stands out the most about the album from the get-go is the entrance; the sound socks you right in the face and takes full advantage of the fact that you weren’t expecting to hear what you heard. What is it exactly that they think that you were expecting? Well, another clean cut Killswitch Engage album. And that is definitely not what this is. Blast beats were never something commonly found in KsE’s music, but sure enough, they decided to welcome back the world with one. A stark change from what they’re known for, the album does little to try and re-emulate the bygone era of Killswitch Engage, the band itself have seemed to make a transformation of sorts, or at least start anew and try to make something unique on it’s own. One of the fears going into this was that they would simply go back to their old sound, which despite the quality of the early stuff, would have been a death sentence.  What’s left then? To mimic The End of Heartache? Not at all, it turns out that both KsE and Jesse have changed and matured musically since they last worked together in 2002.

I’m not saying that they’ve completely left behind the past, but they’ve built upon it, rather than just revisit the same old tropes. Still in place are the metalcore influences, but now they are a piece of the mosaic, rather than the main focus of the piece. There are much more present death metal guitar stylings than ever before, mixed with other 90’s European influences. Mainstream success always garners people saying that the band has gone soft, and Killswitch Engage were no different. Sure, they had a few melodic songs, But if that was a primary concern then consider it gone now. Brutal has never been a quality that I would use to describe KsE or their sound, but I’m prepared to make an exception, there are just several times that Disarm the Descent makes you lean back and go…”damn”.  But not to worry, the catchy choruses have not been abandoned. Even with their new brazen charge of heavier riffs, epic chants make their way into songs. How does Jesse stack up in that sense? Rather well I’d say, in fact he sounds better than ever before.

Much like revisiting your old neighbourhood that has now been gentrified, you recognize some things, while others are completely new to you. Sometimes change is good, sometimes it’s bad. In the end though, I can’t say that Disarm the Descent doesn’t work out, the choruses are catchy, the riffs are varied and almost enough to keep everyone happy, but the one part where the album falls short is in the track listing of the songs. While the production itself doesn’t suffer, there are some questionable choice as to why the song was put there. It may be just me, but when I hear a long fadeout at song’s end, I expect it to be the end of the album, not halfway through. Especially if the actual last track just ends. That being said, if you’re concentrating on that at the end of the album, then you can consider the album a resounding success.

The main takeaway from Disarm the Descent is that it’s not an album that tries to be like something else; it’s a fully formed idea that is confident in itself and where it is right now as a whole. Killswitch Engage couldn’t seem happier with the choices that they’ve made and it shows; simply put Disarm the Descent is energetic, fun, and heavy as KsE fans would like it to be. And though it may be different, it’s evermore proof that sometimes, change is good.