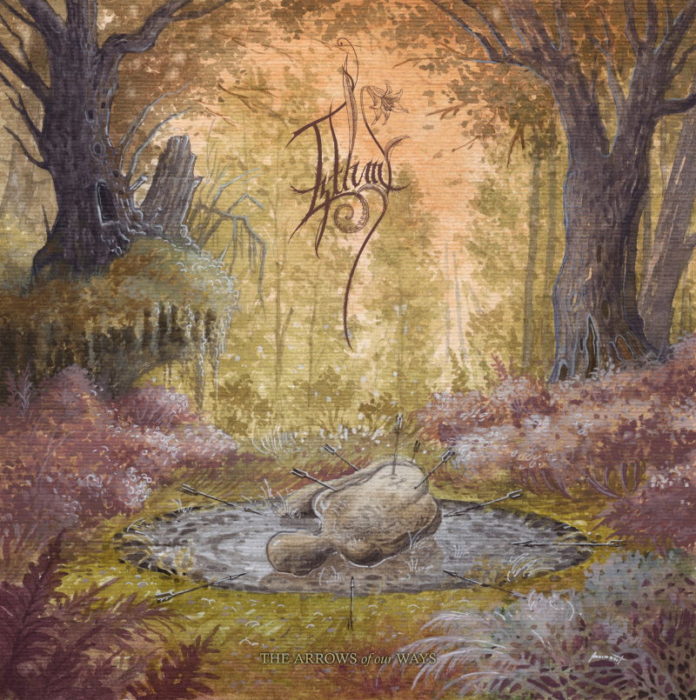 Coming to us from Seattle with their debut album, the quintet of Izthmi make an impression with their wordplay and aggressive blend of metal styles. I’m already expecting their name to blow up in popularity quite soon, because The Arrow of Our Ways makes it quite clear that they take their craft very seriously.

This may not be immediately apparent, as the first track, “Chasm”, starts with about a minute of what sounds like a needle riding the label of a record. Synths slowly filter in, transforming it into an undulating drone track over the course of the remaining two minutes, before “To Traipse Alone” bursts in with guitar and drums. The rest of the musicians join in after the initial attack, riding through the eight-minute-plus track with an eagerness to show off how much they can bend the rules while hammering the listener into pliability.

Vocally, there’s some black metal gurgle-growls going on, while the guitars tend to the clear stridency of death metal, as do the intense drums. The songs lean into a wandering sort of arrangement style, with one riff bleeding into the next, and tangents being a frequent occurrence. Luckily, the band is talented enough to make that approach work for their material, and the songs gain a sense of almost grandiose expansiveness from the willingness to jump from one mood to a sharply different one. They also maintain an impressive sense of flow and momentum throughout the album, with the track divisions sometimes seeming more like a break than a full separation.

There’s some prog mentality to be detected, but it’s in a much more brutal form than the term tends to imply. Instead of floating about and spotlighting time signature changes, the band emphasizes their ability to find a balance between raging assaults and song fluidity, rolling naturally from a blast-beat rage to staggered melodics overlaid with the rasping howls of vocalist Jakob Keizer. Keizer is also responsible for the synth inlays, which give the proceedings a touch of nightmarish disorientation in their finest moments. Elsewhere, such as the two-minute “Interlude”, they provide a brief and gentle brush of depressurization, making the return of the battering rhythms and sharp guitars that much more pronounced.

Maybe most impressive is that in the midst of all this experimentation and bouncing around the band punches out some beats that practically compel headbanging, and for prolonged runs. “A Shout That Bursts through the Silence of Unmeaning” was probably my favorite for that quality, but it’s found in abundance throughout the non-interlude tracks. The density of details and complexity of the songwriting guarantees rewards for repeat listens for quite a time to come, and the sharpness of the stand-out melodies and riffs have enough hook to them to keep pulling ears back for those repeat trips. Here’s to hoping that Izthmi get the recognition they’ve earned with this one, that a vinyl pressing materializes, and that a follow-up isn’t too long in the making.

Izthmi – The Arrows of Our Ways
THE BOTTOM LINE
An excellent and impressive debut effort, and already a strong contender for best of the year, despite such an early arrival
Reader Rating0 Votes
Very strong song-writing
Good instrumental interplay
Vibrant atmosphere
Powerful energy
NEGATIVES
The bridging from one track to the next can be a bit lurchy
The vocals feel a little overwrought at times
4.5