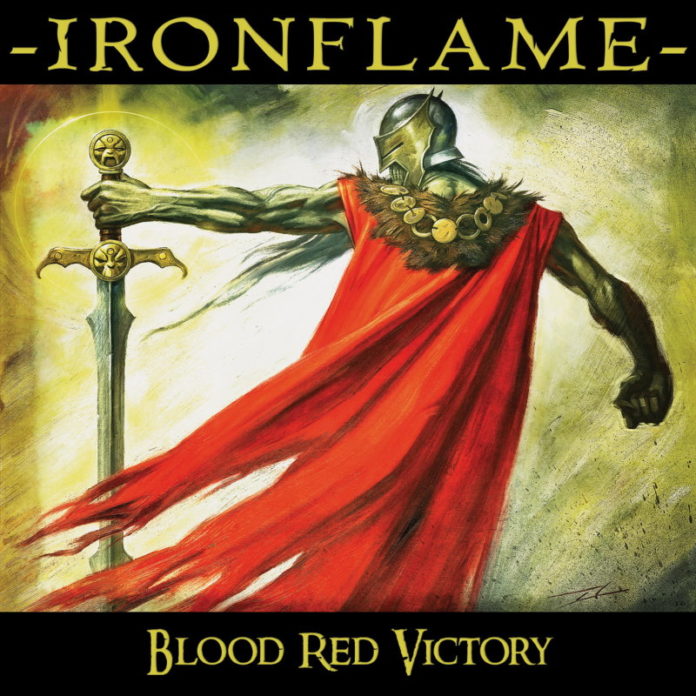 Ironflame‘s third release finds the Ohio-based quintet blending aspects of traditional heavy metal and power metal with more energy and speed behind the drums than one might expect from those styles. The guitar solos (which come a bit too infrequently for my taste) are solid as well, with clear tone and fun noodling. The riffs are sharp and hooky, with enough variety in the main ones deployed for each track to help them stand fairly distinct from each other, while the band keeps the songs tightly in line in terms of tone, tempo, and mood.

Lyrically, things are much less laudable. There’s more than a hint of cynical pandering, tending towards generic power metal dressings (magic, legends, warriors, “ancient mysteries,” etc.), without giving those inclusions enough personality or detail to be more than ornamentation. With some of the more established power/fantasy metal groups, such as Rhapsody of Fire, the songs have a clear sense of the songwriter getting to indulge their desires to tap into a larger mythology. Here, the mentions of spells and secrets here feel more like sparse set-dressing, with little to suggest that there’s a full world to which the line-fillers belong.

As the album’s title suggests, battles are a prominent theme in the lyrics. The early songs in particular have an unfortunately reactionary air to them, with lines like “Invaders from unfriendly shores,” “Send them back from whence they came,” and “Fighting back the bastards who detest our way of life.” Arguably, that can be chalked up to the songs being about warriors and battles (and little else), and it does drain away as the album continues, but it still leaves a weird taste, particularly that early in the album’s sequencing.

Unfortunately, without much content of more interesting nature, the faults stand out all the more glaringly. Even at just forty minutes (in vinyl and cassette forms; the CD cut adds two songs for an extra ten minutes), things are dragging even before the last song arrives. Admittedly, that’s due to the redundancy of the songs, with their lack of individual or album-wide development, not to unskilled performances. Thrown on in the background, I’d imagine it does a fair job as mood-setter for a D&D session. But if you’re looking for some modern power metal that can hold up to actual focus, you’ll probably want to keep looking.

Ironflame – Blood Red Victory
THE BOTTOM LINE
Unremarkable modern power metal, but it'll do the job if you can't be bothered to look for something better
Reader Rating0 Votes
POSITIVES
Good playing
Fun riffs
Tight production
Strong vocals
NEGATIVES
Shallow and non-committal engagement with the lyrical side of power metal
Low overall variety to the instrumental side of the song-writing
Does very little to stand out from decades' worth of material done in the same vein
3