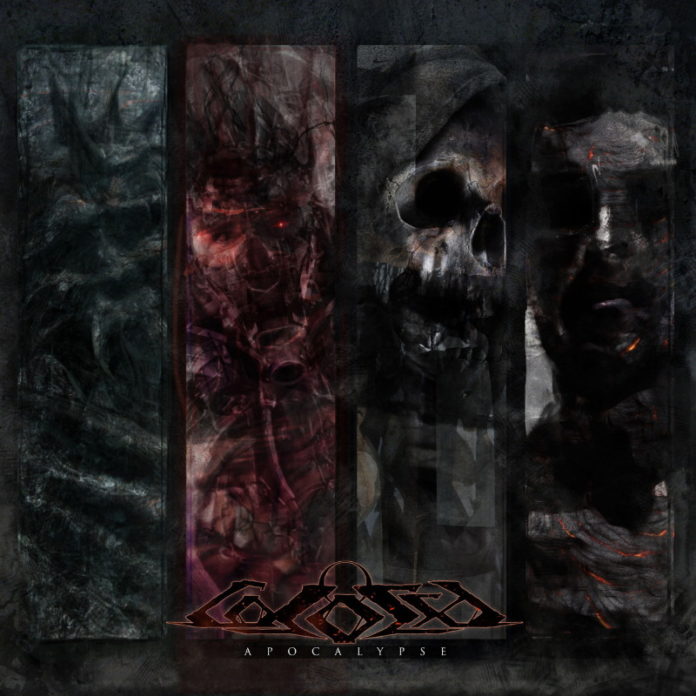 The Four Horsemen of the Christian Apocalypse (“Death”, “Pestilence,” “Famine” and “War”) are the subject of this concept EP, the seventh release from Portugal’s Colosso. Taking a Probot-like approach to the songs, each one features a different vocalist, with band mastermind Max Tomé (guitars, keyboards, and lyrics) voicing “Death”. Interestingly, that one is tucked in at third place in the sequence, rather than being the finale one might expect of the subject matter.

First of the four is “Pestilence”, with Guilherme Henriques (of Oak) as guest vocalist. Opening with a sample of buzzing flies, the song features doom-like heaviness propelled along by the invigorating drum-work from Robin Stone of Norse. The vocals are harsh and low, seeming to draw energy from the thumping low-end main guitar riff, with enough variation packed into its eight-minutes-and-change duration to keep listener attention firmly hooked. Bassist Alexandre Ribeiro (of Grog) turns in a commanding performance, counter-pointing the guitar and vocals with menacing presence.

Second is “War”, with vocals by Sérgio Afonso (of Bleeding Display) which, like the rest of the songs, runs in the four-minute range. Oddly, the tone-setting samples (sirens and gunfire) are tucked into the end of “Pestilence”, making up almost a full minute of that track’s run. Once “War” does getting going though, it sheds most of the heaviness of the first song to find a blistering pace on drums and gut-shaking bass accompaniment. The vocals are largely similar to Henriques‘, but with slightly more rasp to their delivery, and more of an emphasis on sustained roaring.

“Death” steps in on a brief acoustic guitar intro, which continues as the drums slam into action. A deceptively hooky riff (the one that stuck most persistently in my brain) is paired to Tomé‘s mournful singing, and the breaks form interesting snarls in the melodic structure when they crop up. There’s some real banger energy brought to bear here, and the contrast with the quiet interludes is played quite well. As brief as the song is, Colosso fit an impressive number of twists into it while maintaining the central energy, and it’s likely my favorite of the set.

Lastly, “Famine” brings in the voice of Diogo Santana (of Analepsy), with hammer-on-anvil percussion strikes backing the run-’til-you-froth guitar noodling into drum-off rampage that forms the early parts of the song. Santana‘s deep, almost gurgling growl gets a bit overwhelmed by the instrumental intensity, but puts in a good showing nonetheless. Featuring about as many twists to the song as “Death” had, the band alternates between break-your-neck headbanging power and odd-beat breakdowns, leaving its abrupt conclusion all the more mysterious for its lack of fanfare. Still, there’s more than enough to appreciate here to justify a purchase (official drop date is February 14th), and as truncated as the whole may seem, that just makes it all the easier to justify throwing it on for still another play.

Colosso – Apocalypse
THE BOTTOM LINE
Doesn't tap as much into the possibilities of a four-track concept release about the Four Horsemen of the Apocalypse as it could have, but does deliver more-than-solid songs and suitable panache.
Reader Rating0 Votes
POSITIVES
Clever atmospherics
Very strong song-writing
Great performances all around
NEGATIVES
Too damn short
Anticlimactic ending
4