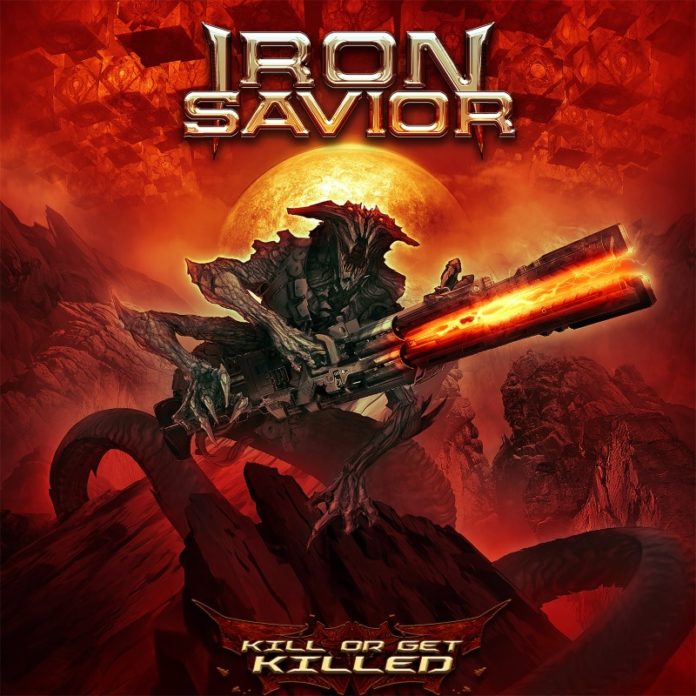 With just a few years to go before they hit the quarter-century mark, the headbangers of Iron Savior are releasing their twelfth album. For this they draw inspiration from Peter F. Hamilton‘s sci-fi novel Pandora’s Star, a 24th-century space war tale. With suitably bombastic riffs and drum blasts, the band blitzes through their power metal channelings of star-ships and mysterious alien forces with rowdy energy and punchy action. Whether you tune out the lyrics or not, the music brings a consistently high level of bravura to its prancing rhythms and get-down rollings.

The songs are sung with enthusiastic intensity, the vocals mixed to rise above the shredding and pounding with clarity to their verses of fighting, resistance, and battles. The band also works some staunchly groovy riffs (personal favorite being the opening of “Sinner or Saint”), and the incorporation of keyboards into some of the tracks, though they do sound chintzy, works well as one of the few elements to indicate any sort of outer space affiliation.

Unfortunately, the lyrics are the weak point. While the background of interstellar warfare, traversing massive distances, and the emergence of unknown life-forms should be a fertile ground for imaginative material, Iron Savior default to clichés and bland rhymes (“Never stop believing / Always keep on dreaming” is an actual chorus, for example). Granted, it’s fairly easy to just ignore them, or to pretend that they’re nothing more than an extra level of percussion and tones, but aside from the presence of a voice to contrast with the other instruments, they add very little to the tunes. Bonus track “Sin City”, providing an AC/DC cover with no apparent thematic connection to the sci-fi theme, gives another example of how attached they were to the galactic flavor.

As such, while the album is enjoyable enough if you just disengage and go with its flow, I’d imagine that it would start to wear thin after a dozen or so plays. Spread out to regular listening frequencies, that’s still pretty good value. The guitarist, bassist, and drummer all do a great job of rocking out when the songs call for it, and if you’re going into it with nothing more than the cover art and track titles to build expectations, it should satisfy quite decently. In the end, most of my disappointment comes from a long-running band, so close to a milestone in their career, demonstrating that even when they’re explicitly trying to do something different (as the sci-fi theme they went with here) they just can’t budge themselves from doing the same old thing once more.

THE BOTTOM LINE
Solid work with some enjoyable power metal antics, but don't go into it expecting anything too special
Reader Rating0 Votes
POSITIVES
Clean and impactful production
Solid grooves
Thoughtfully arranged song-writing on the instrumental side
NEGATIVES
The lyrics never seem to reach for something more than the usual power metal affair, despite the attributed sci-fi influence, and the instrumentation comes off as similarly uninspired
4