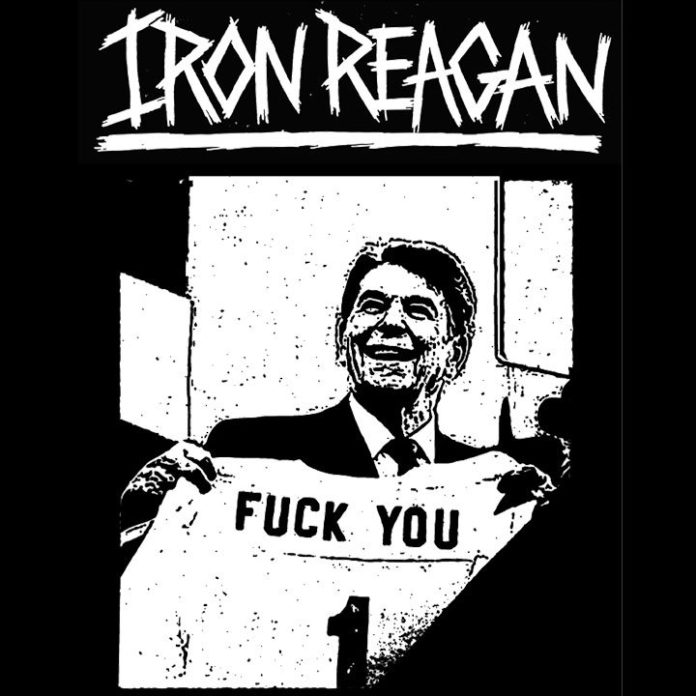 Comprised of members from Municipal Waste and Darkest Hour, Iron Reagan had set out to give their idea of what hardcore punk is, and unsurprisingly it sounds a hell of a lot like Cro-Mags, not that it’s a bad thing.  Obviously with a name like Iron Reagan and the cover of this demo, you’re going to hit on some political commentary, which given the type of music this is happens to be perfect subject matter.  So let’s go!

You are treated to 5 minutes of material on this demo, and boy does Iron Reagan make the most of it.  ‘Paycheck’ starts off with a relatively slow build brought forth by Ryan Parrish, but quickly does a kickflip into your teeth, with Phil “LandPhil” Hall pumping out sharp chords with Tony Foresta energetically belting his lyrical rage.  Paul Burnette is kind of in there, but I suspect that he is more just to keep the beat than anything else.  ‘Eat Shit And Live’ is a ferocious attack of hardcore punk, making you bang your head and pump your fist in the air.  ‘Artificial Saints’ seems to be slightly more controlled, and feels as if it were a b-side from “Hazardous Mutation.”  The last track, ‘Running Out Of Time’ seems like a healthy mixture of sing-a-long punk rock and crossover thrash, giving the demo a very strong ending.  I am definitely looking forward to future material from Iron Reagan, and I’m still a big fan of Municipal Waste and Cannabis Corpse that my taste for Hall’s and Foresta’s music will be greatly met.  Everybody should absolutely check out Iron Reagan if they love any type of aggressive punk or metal.  If you don’t, you’re really dumb.