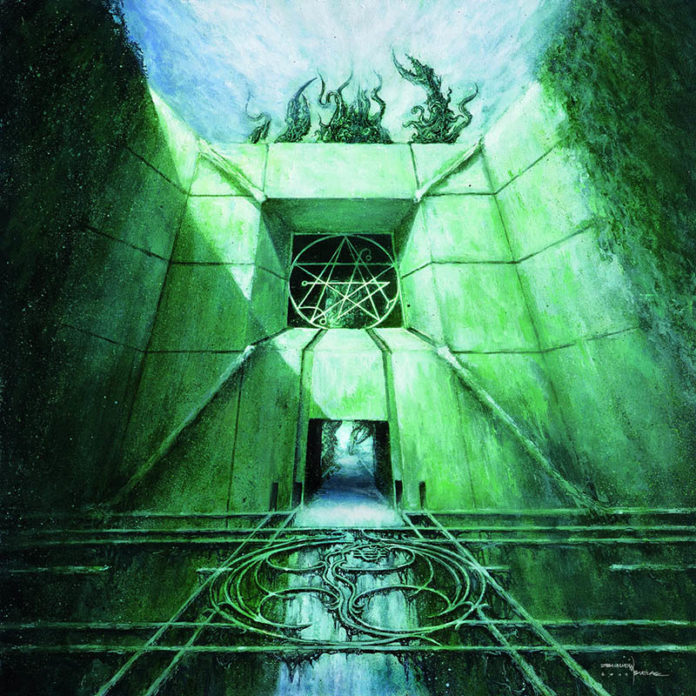 Alright, I know I’m a few months late on this but there aren’t any good new releases happening until the new Goatwhore next week, and I broke my policy of only reviewing black metal bands whose names start with ‘A’ so I’m reaching back to something cool from last year in my return to form. Absu are on their second post-“reunion” record with Abzu (not to be confused with previous album Absu, or coming album Apsu), bringing their blend of black, thrash and bizarre occultism from out of Texas (of all places) to their long-running fanbase. Drummer/vocalist Proscriptor McGovern, which is maybe my favorite black metal name of all time because it makes me think of a dude wearing corpsepaint and a monocle, has kept the black beast breathing since 1993 (how’s that for old school?) and over the course of six albums, an EP and a best-of.

Abzu’s strongest quality is its ability to keep its listener’s head spinning. Between the typical high speed blackened thrash tempos and its off-kilter approach at riffage and melody, it’s like a seasick firework, swerving wildly before going off. Opening track “Earth Ripper” is off with a shot, and things never really let up for the 36-minute runtime, save the odd short acoustic passage. The speed is only one part of the Absu equation at work here-twin guitar riffage is all over the place with furious trembolo-picked fury all over every track. Proscriptor’s drumming is manic to the point where you wonder if it ever slows down, and the sometimes off-in-a-nice-way twin riffage of the guitars keeps things rough enough to be interesting.

“Circles of the Oath” catches a traditional black metal opening, but keeps it thrashy by bringing it into the light. The production sits closer to the latter than the former-the drums are crisp and clear, and the guitars are tight and trebly. It reads like a modernization of Slayer’s mid-‘80s production style, high and tight with distinct cymbal and drum work, brought into the 21st century and given a blackened twist.

One of thrash’s strongest points is its potential for catchiness. If you’re in for catchy riffs, “Abraxis Connexus” has them in spades. Calling to mind fellow American blackened-thrashers Skeletonwitch, Absu spits out some riffs straight at you until it leans back to have a synth line replace the vocals as the focal point. It represents the line between black and thrash the band is able to ride so well-mixing in elements of one with the other and managing to pull it off.

Closing track “Song for EA…” (I’m not typing the whole thing out, look it up) is split up into several “movements” that stand distinct, making the listener wonder why they all had to be smushed together into one track. It captures the mystical environment Absu seem to be trying to nail down, though it occasionally ventures into new-Mastodon territory. There’s great Absu material within it, but it’d be a lot easier to digest your favorite parts if they didn’t take ten minutes to get to.

As it is, Abzu is a fun, crazy album that keeps your on your toes, but is a little short and one-dimensional. Ordinarily I’d give this a 3.5/5, but I’m bumping this up half a point because the packaging is goddamn hysterical. Between maybe the funniest band picture ever, the footnote below the credits reading “NOTE: Absu arrogantly perform mystical occult metal…still” and the in-depth synopsis of the subject matter of four-minute thrash songs, I almost have more fun reading this record than I did listening to it. Put it on in your car on drive, though, and you’ll be speeding down the highway as fast as this record moves.