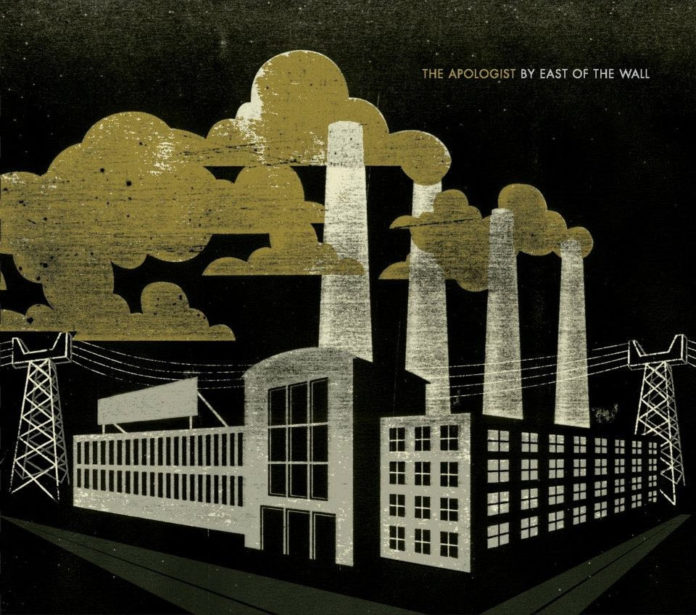 East Of The Wall has quickly carved itself a nice little spot into the metal landscape, thrilling fans with it’s mix of sludgey sounding progressive metal. There’s nothing quite like it; which is why it’s so intriguing. Their last album Ressentiment was by far the best thing they’ve put out; introducing vocals into the previously instrumental band giving them yet another element to bend and twist as they see fit. The minor problems that plagued Ressentiment seemed rather insignificant when compared to the accomplishments of the album as a whole. For the most part, The Apologist keeps up the pace, providing a very good followup but just falling short of passing Ressentiment as the bands best work.

The Apologist starts off with  slow-burner “Naif” that’ll immediately nail down the mood for the rest of the album. Down-trodden guitars ring throughout, and there is almost always something interesting going on behind the main riffs that’ll catch your attention. East Of The Wall succeeds in making an album that fully immerses you in it’s sound and never let’s go; they certainly deserve some recognition for that. Despite the rather recent addition of vocals the real focus is almost always on the instruments, the true stars of any album from these guys. East Of The Wall supply a seemingly never ending supply of thick riffs and interesting drum-play that accentuates each other nicely, and vocals almost feel like a treat when heard. Most of the time, it all works out rather well and the album flows smoothly; there are times when things get a bit off track though.

The Apologist sometimes suffers from parts of a song that just don’t make much sense, or ideas that just don’t seem to work within the confines of the song. One of the major differences between Ressentiment and The Apologist is that songs are generally shorter, and while that fixes one of the problems with their previous album (over-wrought song writing) it ultimately introduces another. There are times where certain sections within a song seemingly comes out of nowhere, parallel parking itself between two solid blocks of music creating an awkward partition within the song that is sometimes jarring. Fire up “False Build”, almost exactly in the middle of the song is a section of ascending chords that seem forced and out-of-place. Thankfully it doesn’t happen a lot, but it’s still a little disappointing coming from  a group of great writers and collaborators. Perhaps that’s part of the problem? Too many cooks in the kitchen?

As mentioned before, the vocals never detract from the instruments and are generally enjoyable to listen to. The beginning of the song “The Apologist” is an excellent example of this, putting the vocals in the background while layering instruments on top. Unlike other bands who do this though, you can actually still hear what he’s saying! Amazing! Why can’t more producers or mixers do that? The overall mastering of the album is also done very well, always allowing the songs enough room to sound like they can breathe without hitting a glass ceiling. Everything is at the perfect volume, which helps create a very enjoyable listening experience no matter what you listen to it on; iPod ear buds, laptop speakers, or a nice pair of headphones.

The Apologist is a damn-solid album and will surely attract a lot of new listeners due to it’s laid back style of metal and interesting themes. The main problem with it, is that it just doesn’t do anything that wasn’t done before on Ressentiment. Everything is all a little too familiar if you’ve ever listened to their previous album; if you’re a new listener than by all means pick up The Apologist first. It fixes most of the problems that existed with Ressentiment and adds a layer of polish on top that is welcomed. It’s a smoother ride with less bumps along the way, so why not? If you’re already a fan of East Of The Wall, than just don’t expect to be blown-away.