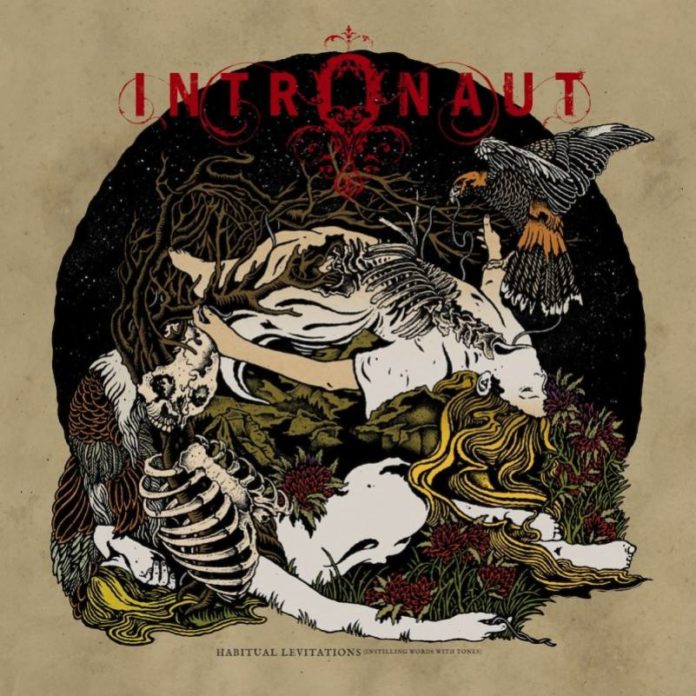 Ever had one of those situations where a band or album didn’t “click” with you until long after your first exposure? Intronaut was one of those bands for me. I first saw them in 2009 opening for Mastodon, and though I was caught by the “dense-ness” of their sound and the unique talent of their bassist, I didn’t pay them much mind for a while. When I caught them again opening for Meshuggah back in February, I’d had more exposure to their music and thought they put on a good show, but I still wasn’t a full-on convert. It took their new album, “Habitual Levitations (Instilling Words With Tones)” to make a true believer out of me. This is the first release that sees Intronaut truly realizing the potential of their sound…and even if you are already a seasoned fan, this record holds up as maybe their best yet.

Habitual Levitations made me realize how unique the band’s combination of sound is. Take two guitarists playing ur-heavy sludge riffs, lower tuned than ever, add a dazzling death metal drummer (Danny Walker, who’s put in time with Exhumed, Jesu and Murder Construct) with just the right amount of flair, throw in a fretless bassist with a background in jazz to bridge the gap, and sprinkle some post-rock over the top. It’s a unique combination that I don’t see anyone else attempting, and it’s a combination that sees its potential realized on this record. “Steps” combines the crushing, seasick heaviness of post-millennial Meshuggah with stop and start accompaniment and the now-trademark harmonized chants from vocalists/guitarists Sacha Dunable and Dave Timnick – think a crooning Crowbar by way of Alice in Chains. Elsewhere, “The Welding” sees the four-piece layering rhythms above one another, starting with a squawking guitar and eventually adding a thumping bass and a 4/4 drum rhythm to hold the whole thing down. Though each instrumentalist seemingly comes from a different world, they turn their differences into strengths, rather than weaknesses. In doing so they’ve honed their unique sound to a fine point, like they had never done on their previous records.

“Milk Leg” comes about as close to a single as you’re likely to see on this record, but it’s more willing to walk the tightrope of odd times and fretless bass fills than deliver a catchy chorus. “Harmonicon” (my favorite son in the album) is more or less the Intronaut version of a ballad; Beginning with a short bass solo against a backdrop of shimmering guitars, it builds up into a break reminiscent of The Mantle-era Agalloch before the cleanly sung verses begin. Intronaut fans might be disappointed to find the harsh vocals of previous releases removed completely, but it’s difficult to imagine these songs with any different vocal style. They’re tuneful and never overbearing or used too often. If there’s one aspect of the Intronaut sound that sees a revolution and not an evolution, it’s this. Like every other facet of their sound, it’s one more piece of a puzzle that truly came into focus on Habitual Levitations.