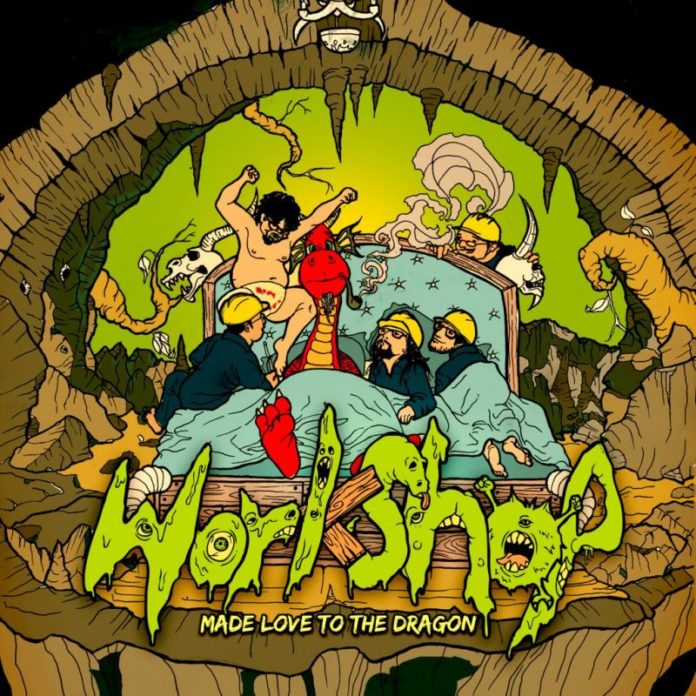 It’s really exciting to live in a time where Metal is beginning to creep out of every nook and cranny of our fair planet. To find a band like Workshop, a tongue in cheek Metal act from India, is quite a marvel and I only hope that India and other countries like it continue to churn out Hard and Heavy acts to join the worldwide Metal community.

The best part about Workshop is that they’re actually pretty good.

Made Love to the Dragon is the band’s second full-length album and their first on EMI Music India. It’s a fun Hard Rock romp and an excellent first foray into heavy music for the label. While the musicians in the band are far from the best you’ll ever come across, much like AC/DC, Metallica, and any number of great Hard Rock and Heavy Metal bands, the result is greater than the sum of its parts.

One stand-out aspect of the musicianship in the band, however, are the guitar players. Devesh “The Deveshtator” Dayal and Sahil “The Demonstealer” Makhija grab the listener as soon as the opening track kicks in. They’re by no means at the same level of, say, Dave Murray and Adrian Smith, but they’re solid players who clearly know what they’re doing. Although not what I’d call technically gifted as a singer, The Demonstealer’s vocal style is what gives the music a lot of its charm. His accent puts a definitive stamp on the album as an article from India. His lyrics are excellent as well, describing the humour of Indian life and culture, including their sexual conventions (The song “She Came” is a hilarious highlight of the record).

As one could expect, however, the production is a bit of a letdown. India as a country is brand-new to the world of Metal, so it makes sense that things may not be crystal clear. That being said, this sounds like a demo recording from about 20 years ago. I hope that if and when Workshop gains some popularity they’re able to take the time to re-master and rerelease this album, because a bit of work in the booth would go a long way to elevating this to higher places.

Though I’ve been aware of the nascent scene in India for some time, Made Love to the Dragon was the first opportunity I’ve had to really sit down and listen to an album from that part of the world. I was pleasantly surprised and genuinely enjoyed the entire record. I hope a big name picks these guys up to do a tour (I’m looking at you Iron Maiden), because it would be awesome for them, and awesome for the Metal community in general. Check out Workshop. They’re a funny, light-hearted, intriguing little band who definitely deserves a little recognition.