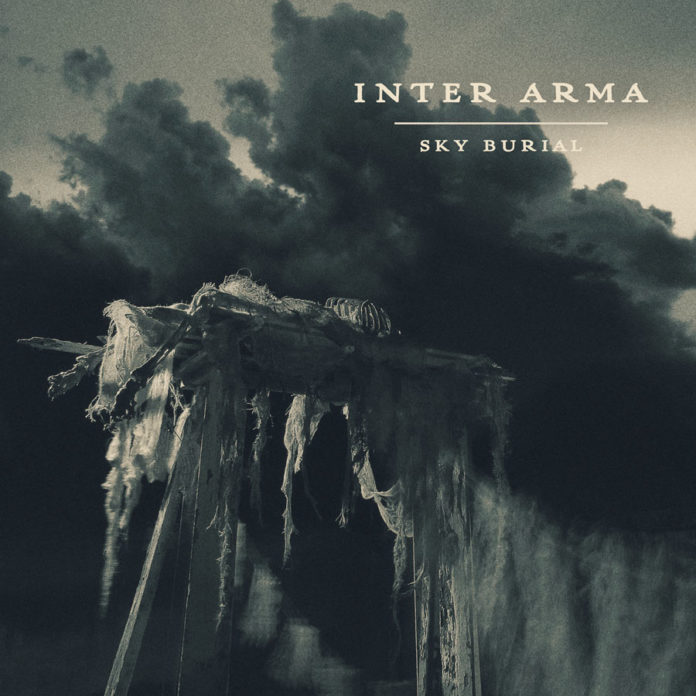 It’s easy to think that post-metal’s jumped the shark. Like post-rock before it, it almost seems to have become too formulaic. The build-climax-release formula is always effective and has been since the dawn of music itself, but it’s a musical tactic that you can see coming a mile away, and it’s become so ubiquitous that it’s almost impossible to tell one band in the Cult of NeurIsis from another. And so many of the previous titans have tweaked their formula or dissolved altogether – Isis is sadly no more, Neurosis has gotten folkier with each progressive album, Cult of Luna have moved on to greener and lusher musical pastures, and even Pelican has started singing on their records. Since each of the lesser bands have become almost interchangeable, a group doing something new with the formula is always going to be a welcome addition to the scene. But what is there left to do in a stagnant and predictable genre, you ask? Enter Richmond, Virginia’s Inter Arma, with their second full-length Sky Burial.

The really interesting thing about Inter Arma is how many elements they’re able to weave into their sound. Sky Burial features not just your typical guitar/bass/drums/vox setup, but there’s a ton more going on – atmospheric keyboards, acoustic interludes, Eastern percussion, and even a goddamn theremin on “Love Absolute.” The best part about this is that they’re able to weave it all together into a cohesive whole, which is difficult for any band to do without sounding like they’re deliberately throwing in everything but the kitchen sink. It’s a wide palette of sounds, but it never crosses the line into gratuitous and unpalatable Mr. Bungle territory. They know how to temper the more exotic elements of their sound and only use them where they’d be most effective; this self-control is very rare to see in a band’s sophomore album, and this reason alone is why Sky Burial’s worth at least a listen.

However, this is a post-metal album, so some of the tracks tend to be a bit predictable. While cuts like “Westward” and “Destroyer” have some solid Neurosis-esque sludge riffs, “‘sblood” meanders towards a climax that never really comes, and most tracks have the build-climax-release formula down to a tee. But Inter Arma know just how to shake things up in the best possible way. The highlight of the album for me, and the musical suite that defines the album’s mentality perfectly, is the two-parter “The Long Road Home.” The first part, “Iron Gate,” builds the mood with an acoustic passage and judicious use of atmospheric pads, but it really starts to take off in the second part with a soaring guitar solo that’s almost straight-up David Gilmour. The song builds, it rises, it lifts its skinny fists like antennas to heaven, you’re absolutely certain that it’s going to erupt in a heartfelt and glorious climax that you won’t even remember once the next track starts, but then out of nowhere WHAM, BLACK METAL BLASTBEATS. WHAT NOW, BITCH?

If you give Sky Burial a listen, it’s guaranteed that you’ll be surprised. If slow riffs and post-metal is your thing, I guarantee that you’ll probably even be pleasantly surprised. With a well-structured and well-paced debut that bucks convention and stands head and shoulders above a sea of lesser peers, Inter Arma has earned themselves a place on the map. If the next album’s anywhere near as good as Sky Burial, they could be spoken of in the same breath as the greats. Keep an eye on these guys; they’re destined for very good things.

But isn’t this their second album?

It is! Thanks for the correction, edit forthcoming.