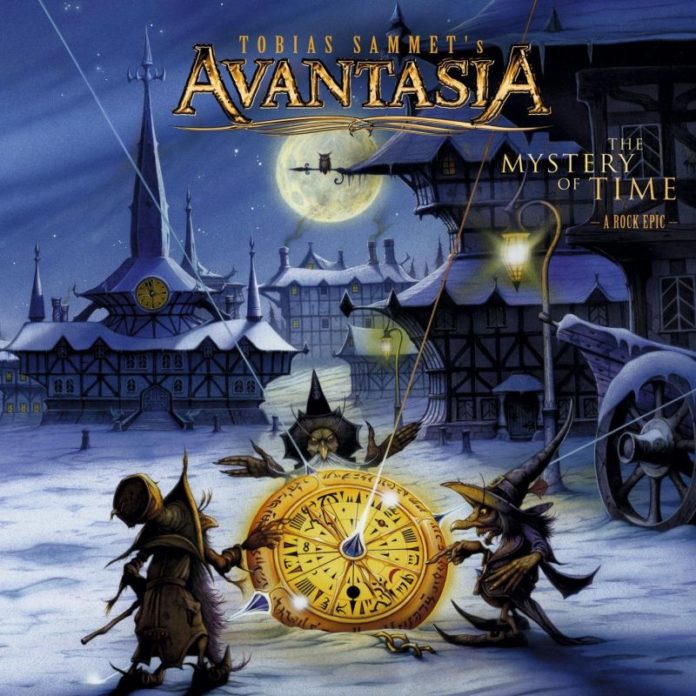 Avantasia’s legendary Metal Operas are the main reason I am into Power Metal to this day. I’ve always admired Tobias’ ability to link the two seemingly distant worlds of Hard Rock and Power Metal and produce truly enchanting records, full of passion and energy. Revamping the project back in 2007 with The Scarecrow was, in my opinion, one of the most joyful pieces of news in contemporary Metal history.  After these aforementioned releases, spectacular The Wicked Symphony and its not-so remarkable counterpart, Angel of Babylon, Tobias Sammet’s Avantasia is back with a new release, The Mystery of Time.

Being a huge Avantasia fan-boy, I could go on for days about how this record is a magical masterpiece. However, I’ll try to assume a neutral approach for this review, not because I don’t like the record but solely for the sake of relative objectivity. In essence, The Mystery of Time is a much more Hard Rock-oriented record than any of the previous Tobias‘ enterprises (save for Edguy‘s Rocket Ride). The album is also more Orchestra-driven than its predecessors, which can only be expected considering that an actual orchestra was involved in the making of the album.

When it comes to the songwriting, and while the spirit of Age of the Joker (the latest Edguy album) echoes throughout The Mystery of Time, most of the tracks have a significantly different feel than any previous release, adopting a mellower and more emotional style, turning to the Orchestra rather than the guitars for the main lead. The odd song in this record is “Where Clock Hands Freeze,” a tribute of sorts to classic Helloween, featuring, you guessed right, Michael Kiske. Although a catchy tune, Tobias might want to reconsider trying to make the next “Eagle Fly Free,” especially since he’d done so incredibly well with “Reach out for the Light” already. Another novelty in this album is that the “epic” tracks are not nearly as epic as the ones in “The Scarecrow” or “The Wicked Symphony”,  being simply slightly longer tracks with generic verses and catchy choruses.

Regarding the guest-star troupe, the lineup is significantly shorter than on the previous records, something that although might bother some fans, actually gives more album time for most of them to prove their worth. Biff Byford, for example, turned out to be the most pleasant surprise, mainly because I could never have imagined him singing this heavy, dark and symphonic type of music, proving that both wisdom and skill come with age. Michael Kiske and Bob Catley might be considered regulars when it comes to Avantasia, but their contribution is in no way less significant because of this, although the latter could have been given a larger part. Ronnie Atkins and Eric Martin also proved that they are resourceful, and thrive in the songs they were given a role in. Joe Lynn Turner is possibly the biggest name on the list, and although I am amazed at how well he sounds after all these years, he does not bring anything special onto the table: his performance is mostly technical and devoid of the emotion required for this kind of project.

To conclude, this album will be embraced wholeheartedly by Avantasia fans, but is still missing that special something to get through to those skeptical about Tobias’ latest undertakings. Although as far away from The Metal Opera or Mandrake as can ever be, The Mystery of Time is a logical follow-up to the previous Avantasia records and a hard, rocking album you will most definitely enjoy.

Fun album, I enjoyed it!

Ted Nugent – Shut Up and Jam!