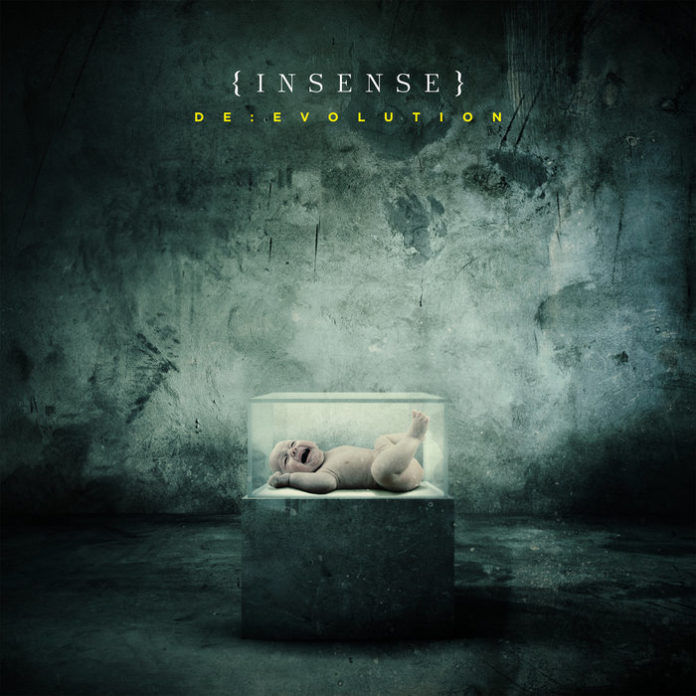 Over the last couple of decades, melodic metalcore has grown in prominence, thanks in part to bands such as In Flames and Soilwork, who have actively blurred the lines between melodic death metal and hardcore, influencing countless bands in the process. Melodic death metal and metalcore have become almost interchangeable terms due, in part, to the sonic similarities and similar lyrical focus.

Insense are a young Norwegian band that have elements of both of these genres, and who hope to make a name for themselves with De?:?Evolution, their debut full-length. Insense have a similar vibe to Five Finger Death Punch, with a lot of tough-guy metal and hardcore vibes, coupled with melodic vocals and soaring guitar solos. There are a lot of switches from light to dark in the tone, which can be a little frustrating, particularly if you’re looking for some really good heavy grooves to bang your head to. The riffs are a tad too formulaic, “Meandering” being a great example (as well as an unfortunately accurate song title). Here the riff starts off really heavy, before going into a more melodic “pretty” section, which is essentially the same layout of a Killswitch Engage song (another band you could compare Insense to).

The recording isn’t terrible, but the mixing really could have been handled much better, particularly in the vocal department. The vocals are much too high in the mix and, honestly, the vocalist shouldn’t really be the focus in this band, as the riffs are much more interesting. Also, you get the feeling that Insense don’t really know what sub-genre of metalcore they want to go with, as they also have the djent-like song,“Lack Of Progress” nestled in with the rest of the more traditional melodic songs. As a result of this, the production is a bit schizophrenic, with some songs sounding more polished than others. I also feel the songs are a little too short, giving the listener too little time to relish a good riff before the song is over.

Insense have some great moments on De:Evolution, but they really need to tighten a lot of screws, and learn more control before they become a working, well-oiled machine. Fans of the American metalcore bands like Killswitch Engage and All That Remains will probably enjoy De:Evolution, but Insense won’t likely appeal to fans of the more aggressive stuff.