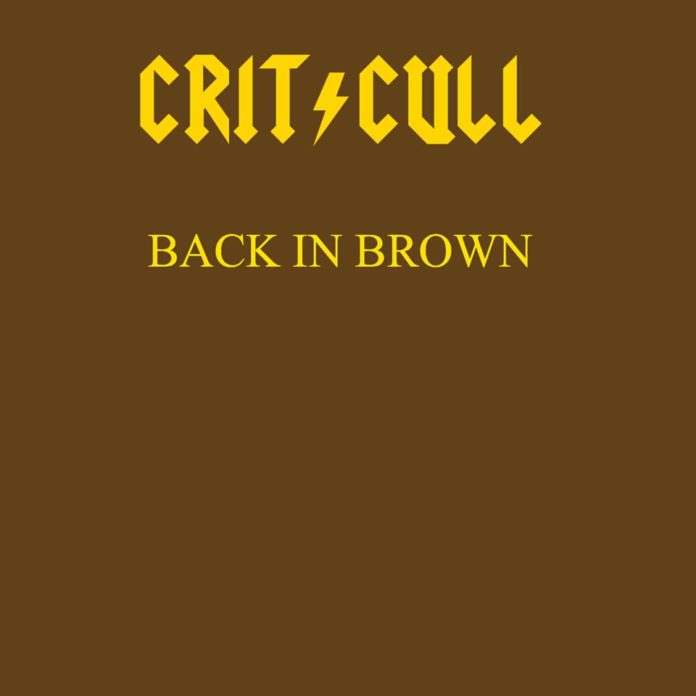 Criticull have been bringing their unique brand of funked-up thrashing mayhem to Ottawa-area crowds for a couple of years, and have finally gotten to the business of cranking out a recording that approaches professional grade. Back in Brown is an EP full of the band’s signature sense of humour, cacophonous arrangements and more scat references than you can throw your charmin ultra at.

What the release lacks in packaging (it’s a simple cardboard sleeve housing a CD-R with the title written on it in marker) it makes up in music. The opening song, “Eye for an Arm”, is a stand-out track for its sudden twists and turns as well as its showcasing of Cutter’s varied but loose and unrefined vocal delivery. It’s refreshing to hear a vocalist unconcerned with technique and who is willing to just belt out lyrics however he feels them. The inclusion of saxophonist Man Dee also lends the songs an added texture that separates the bandfrom other Funk/Metal fusion acts. At times she provides the licks and at others she lays down the rhythm; it’s almost like she’s filling the position that, in a more traditional band, would be occupied by a second guitar player. The EP is produced serviceably but simplistically: Cutter is placed front and centre, and everything is audible and clear, although Ried’s rhythm guitar parts are sometimes drowned out by all of the other craziness going on. Nothing is ever really given a push at key points during the songs; there are no right-channel/left-channel tricks. It’s basically the production that was needed and not much more.

While the production and overall packaging still leave a little to be desired, the songs are so refreshing that they almost completely make-up for it. Criticull is a band that doesn’t forget that music is something fun, and as such they never shy away from infusing the songs with low-brow humour and general weirdness. The fact that they’re all clearly skilled musicians who are serious about their individual playing makes this attitude toward song-writing and presentation that much more refreshing. Songs like “Pick up my shit” (A song about picking up after your dog) and “Sex Candle” (self-explanatory) will make you laugh as much as mosh.