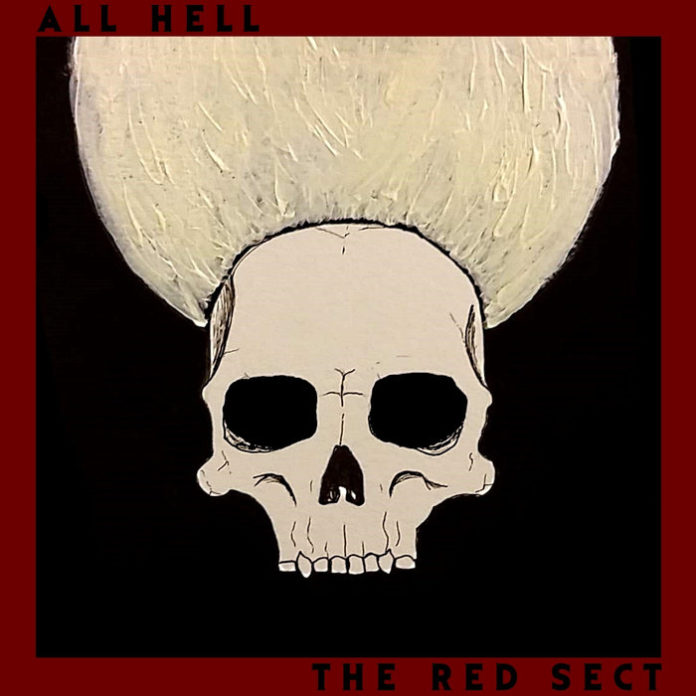 All Hell’s blackened thrash sound is reminiscent of a lot of those potent, quick-picked forces of the last few years. In fact, since the gradual winding down of the retro-thrash movement of the last decade, it seems as if most of the newer thrash bands that rear their ugly, speed freak heads follow this well-trodden path pioneered by the likes of Sodom and Slayer, and continued by Hypnosia and Toxic Holocaust.

Speaking of Toxic Holocaust, they are the most obvious point of comparison when absorbing All Hell’s sonic assault on The Red Sect. The similarities are so prevalent that it came as little surprise that Joel Grind, TH’s main driving force, served at the production desk for this project. One wonders if he also had a hand in steering the band in certain aesthetic directions, because even going beyond the production, the vocals of Jacob Curwen sound almost exactly like Grind’s larynx-shredding, bombastic approach. To me, the only true aesthetic differences between All Hell and TH are a slightly smoother guitar tone and song structures that dial back just slightly on the punk influences.

The whole album is generally a little less choppy than most works by Toxic Holocaust, almost betraying a penchant for Iron Maiden-style galloping melodies running just below the surface of the band’s caustic, nihilistic approach. It’s a welcome dividing line between All Hell and many of their blackened thrash compatriots, although it’s not quite enough to bring them out of the realm of being largely copyists. Nevertheless, The Red Sect is an enjoyable listen front-to back and while I hesitate to say that it will be some kind of future classic, it is definitely worthy of your time and money if you prefer your thrash metal to be wild, raw, primitive, and dark.