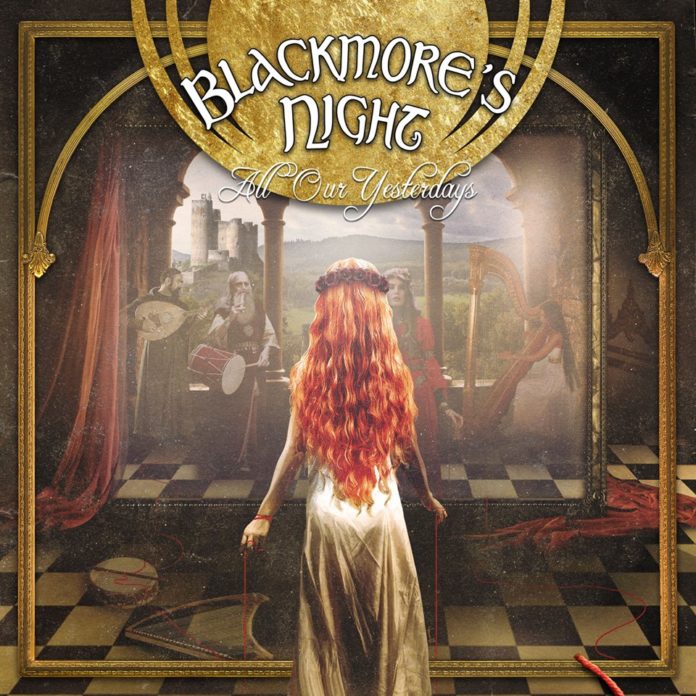 While in folk rock it is common to see the rock elements as the dominant characteristics of the sound, one of the interesting thing about  Blackmore’s Night is that they take the opposite approach, actually removing nearly all of the rock. This may not be odd on its own, but when you consider that one of the members of this two-person act is no other than Deep Purple‘s very own Ritchie Blackmore, things seem a bit strange.

As one would expect, All of Our Yesterdays takes an entirely acoustic approach, forgoing the evils of electricity. Mandolins accompany the acoustics and Blackmore does a solid job of taking the listener to various destinations with the shapes and mood he creates. At times it feels like walking the streets of a bustling bazaar, to sailing calm waters in a pirate ship, to sitting at the round table with King Arthur and his knights. Point being, there is an ancient feeling crafted by the sound that doesn’t really seem very connected to modern times. It seems to be made for those with an interest in historic fantasy with large doses of romance (there is even a song that almost crosses the border from folk into country, but the near trespass can be forgiven by the upbeat Western number that directly follows it). Although, obviously, this isn’t for everyone, it is commendable to see a well-established artist taking on a genre that is a complete 180 from what they’re known for.

While All of Our Yesterday may not be what fans of Deep Purple or Rainbow might be looking for, there is a high degree of skill that is put into the sound. The instrumental sections flow without a hitch, and are very smooth and clean, making the most out of the rudimentary tools used to conceive it. The vocals are also impressive, with a wide range that feels much like Within Temptation.

The one hindering quality of the album is its length. There are a few songs that seem to go on well past their logical endpoint, and trying to make a twelve song album with the severe limitations that Blackmore’s Night placed upon themselves is a near impossible task. The little bits of upbeat mood and whimsy really pull the album together, but it is hard for those moments to shine when they are stretched out mercilessly.

Overall, this album is a decent effort. It is refreshing in the approach it takes for mood and theme, while also being a piece that is unique to the artist. Unfortunately, there is a lot of space for editing and fat just dying to be trimmed, but I suspect a bit of vanity may have prevented that from happening. If you enjoy folk rock or, more accurately, just folk, take a listen; however, if you can’t stand a soft instrumental and things that essentially don’t rock, you should probably sit this one out.

IN A NUTSHELL
Good for what they are, not good for everyone.
POSITIVES
Clean, well done instrumental
Excellent Vocal Range
Unique Mood
NEGATIVES
Behind the times
Loooooong
3.5