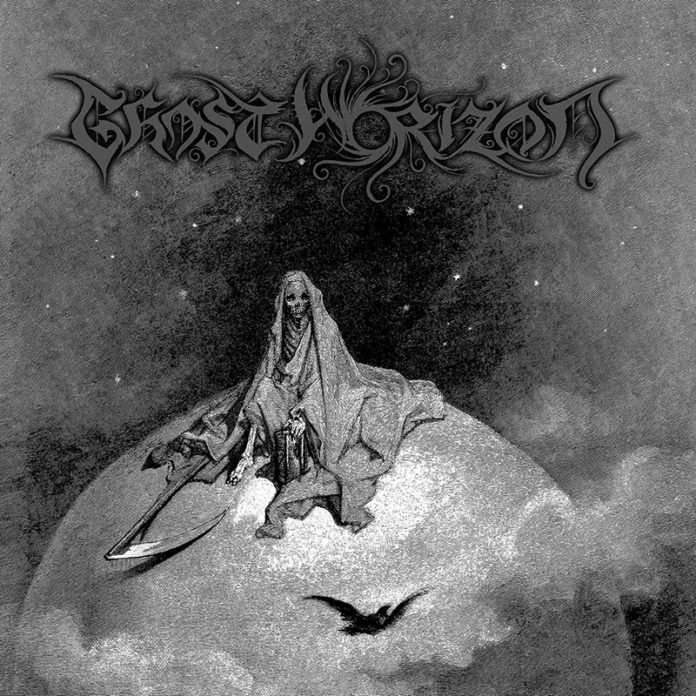 With their second EP, the two-man group of Ghost Horizon have switched out vocalist/drummer/etceterist Uræus to let founder/guitarist/bassist Daniel Stollings take over vocals, and bring in “Frog” Magus of Norse on drums.  Stollings explained his decision to handle vocals himself as a way of fitting the deeply personal content of the music, which proceeds from a black metal base, with fuzzed but sharp guitar washes, guttural rasping, and hard-impact drums, to play with some of the style’s conventions.

Those experiments come in the form of prominent clean vocals (standing out quite a bit in “So Hollow”, the EP’s second track), slow solo strings, piano backing, little touches of early-’90s emo structuring (“This Forever Flow”), and other tweaks here and there.  Sure, they’re all twists that have been tried out by black metal before, but Ghost Horizon do a nice job of bringing the pieces together into a set of songs which are cohesive on an emotional or aesthetic level, building a sense of character and supporting Stollings‘ claims of personal investment in the music.

The EP’s shortness is probably the biggest strike against it, while at the same time being one of its prime strengths.  Things are kept compact enough for the jumps in song-writing approaches to not feel particularly jarring, but that also means none of the threads are pursued particularly far, so if one of them really grabs you, you’ll have to be satisfied with that one track.  As a look into the band’s development, the EP is interesting, and shows some strong potential for future efforts, but as a twenty-minute or so stretch of music without that context, it’s a bit too disjointed to really let yourself get drawn into its groove.