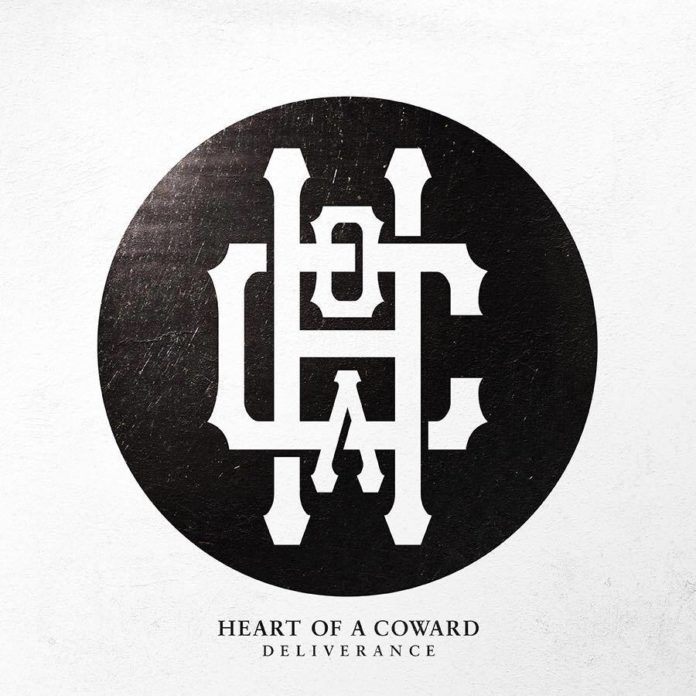 Returning with their third album, the metalcore quintet of Heart of a Coward go for a semi-conceptual style on Deliverance, with two pairs of linked songs popping up in the track-list, and a sense of unfocused resentment wrapping together the LP at large. Cleverly setting the bar for expectations near the first rung with the cover art, Deliverance does ratchet it up a few notches with its actual content, though not enough to let them get away with that brushed-steel presentation.

While they yell and bash out some rattling percussion with plenty of energy, also given to the noodly guitar-work which crops up occasionally, the fire of their rebellious attitude gets doused by restraint too regularly for the band to build up much momentum in any of the songs. Practically every time they start to get a real storm going an awkward break-down or vocal interlude gets jammed in and disrupts things, or the force gets squeezed out into an unsatisfying finish that doesn’t capitalize on where the playing had built up to that point.

To their credit, the band generally avoids the stigma of melodeath (at least until the end, where it breaks out in earnest), but it frequently feels as if that was their initial impulse, reworked to help them avoid Hot Topic association. Not to push them back towards what they might understandably be trying to escape, but (at least to my ears) the parts where HoaC do get a little A7x with it are some of the only times where they show real attachment or interest in what they’re doing; the rest comes across as too derivative to get the listeners, or even performers, that enthused.

On the vocal front, while the yells and growls come through with a narrow range of delivery (and the quick appearances of spoken-word lines come and go without much impact), the mixing does it plenty of favors, giving it punchiness to match the bass plunking here, some subtle echo there, and providing the ‘listen to me!’ cry-outs with enough acoustic ring to get over the banging drums. There are also a few riffs which are catchy enough while they’re playing to get a head-bob or two out of listeners, even if they aren’t that taken with the rest of it, though these are weighed down by some weak lyrics.

Here’s a quick test you can run: see how many repetitions of “Now is this what you want? / Is this what you envisioned?” you can stand to hear, and if it’s in the double digits before you get annoyed, you should be good to go on this album.

Bodom After Midnight – Paint the Sky with Blood