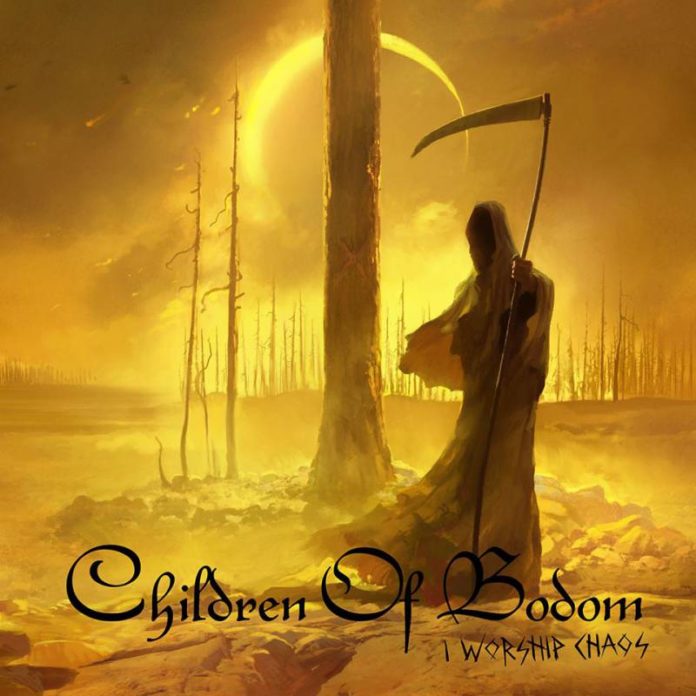 What a legendary institution this band has become. Love ’em or hate ’em, Children of Bodom have exerted a MASSIVE influence on the modern metal scene since their debut dropped in 1997. But over the course of their last handful of albums they have seemingly slipped into a bit of a rut: their once perpetually evolving sound becoming samey with a slight dip in quality. While there have been bright spots for sure, it could definitely be argued that the band’s last truly essential disc was Hate Crew Deathroll way back in 2003. It is my pleasure to inform you though that the adventurous, marauding Bodom of old have made a triumphant return in the form of I Worship Chaos, and they’ve done it with all the power and passion that was so prevalent in their best albums.

The record opens with “I Hurt”, which brings in a new element to the CoB‘s soundscape: Hatebreed-style chest-thumping hardcore arrangements. That chorus is a complete monster, and anyone who says they weren’t thoroughly grooving on that chorus from the first listen must have no soul whatsoever.

Elsewhere we see the band reaching back and reassessing their black metal roots. “Horns”, for example, is straight-up Dimmu Borgir-style black metal without all the gothic and symphonic bullshit clogging up the works. Alexi Laiho‘s voice is as vicious as ever, but it now rings out with a depth and texture that has not always been present. While previously his hellhound howls were obviously the product of merciless throat torture, his voice now comes from deep in his chest, which although lowers the violence adds to the overall strength of his delivery. Lots of people praise his guitar playing (which is, yes, still excellent), but the man doesn’t get the credit he deserves for his vocals. In my opinion he has one of the most powerful and unique voices in extreme metal today.

Of course it wouldn’t be a CoB record without copious amounts of blackened, corrupted power metal everywhere as well. The most obvious example of this biggest of Bodom trademarks comes in the form of the slow, epic march that is “Prayer for the Afflicted”. This is the sound of a defeated and desperate army, climbing snow-covered cliffs toward a home they’re not even sure still exists. This track reminds me more than anything of dark, melancholic Accept songs like “Princess of the Dawn” or “Head Over Heels”, of course filtered through Bodom‘s frost-bitten worldview. Truly epic stuff and a sure bet for one of the best tracks on the album.

Of course I am,  and always will be, a little sore about the production on post-Hatecrew Bodom records. In my opinion, Follow the Reaper had one of the best, glass-shattering heavy metal productions of the last 20 years. The damn thing is so sharp you could use it for brain surgery. The fact that the band has since abandoned that production aesthetic for something ever so slightly sludgier is, to me, one of the unsung missteps of their career, as it is probably the one element of their sound that now detracts from their overall uniqueness. So while the production is more than adequate, and in fact is only surpassed by Relentless Reckless Forever when comparing the last ten years of the band’s output, I’m just going to sit here and be that guy whining for a return to the glory days.

This is truly a return to form for this Finnish institution. A testament to the hard work that they have continued to put into their craft, and another piece of evidence that these guys both know and love their metal. If you’ve been ignoring Children of Bodom over the course of the last few albums, this is definitely where you should jump back on board.