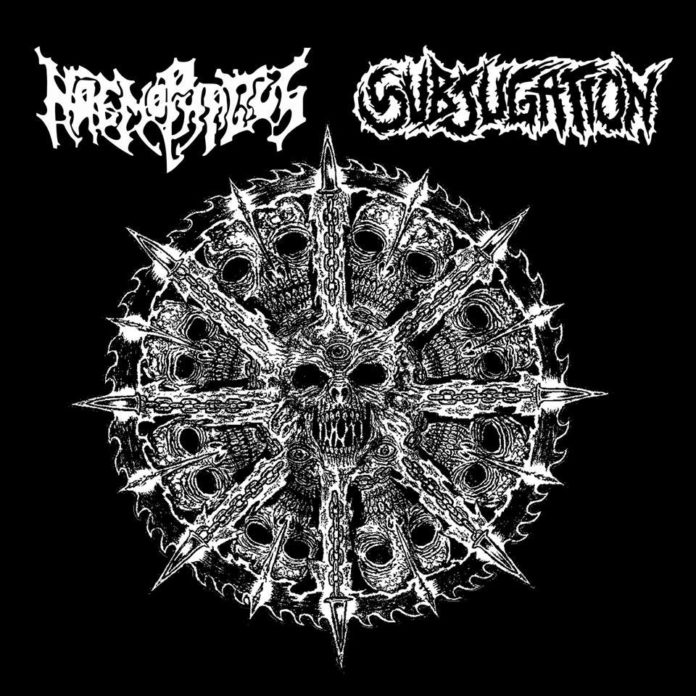 Italy’s Haemophagus are labeled as exponents of “slow” grindcore. This seems as much of an oxymoron as “tall midgets” and “dry water,” and shows how pointless it is to be obsessed on genres. For starters,  based on the two songs they’ve contributed to this split, I wouldn’t even consider them to be part of the genre at all. When they’re slow, as in “Hibernated World,” they just seem reminiscent of the doom metal of Conan (although with a lyrical approach considerably closer to what Chris Barnes does with Six Feet Under), while their speedier approach in “Monster in the Park” just seems like a homage to Venom. Far from the blast beats of Napalm Death or Anal Cunt, to name two of the most well-known grind bands, Haemophagus seem to want to be something their music can’t agree with.

Much closer to what people think when “grindcore” comes to mind, Turkey’s Subjucation are all about raw power. Their songs are short, heavy, and to the point. While not pig-squealed, their lyrics are sang in the growling styles of Napalm Death, with plenty of low tones throughout, as well as some occasional “cleaner” growls, like in their song “Under the Whip” (where the voice actually reminded me a lot of that of Watain‘s Erik Danielsson). It’s heavy enough to keep you moving while you’re sitting listening to it, with your legs going up and down as you try to keep up with the machine-gun speeds of the drumset.

The problem that you find in many splits is that the bands being presented together lack the consistency required to make up for a single product. This is precisely the case here, where Subjugation simply blow Haemophagus out of the water in terms of musical coherency and production. While Subjugation were greatly produced (for the genre), Haemophagus came off as being in dire need of someone much better prepared to handle the duties of both production and mixing. It didn’t help that the Italians also failed to pick (and stick with) a style for this split, and instead opted to present two tracks that are not only not that good (although they’re by no means bad) but that also don’t really give a clear idea as to what exactly they are all about.

Great job by Subjugation… an unsatisfactory mark for Haemophagus.