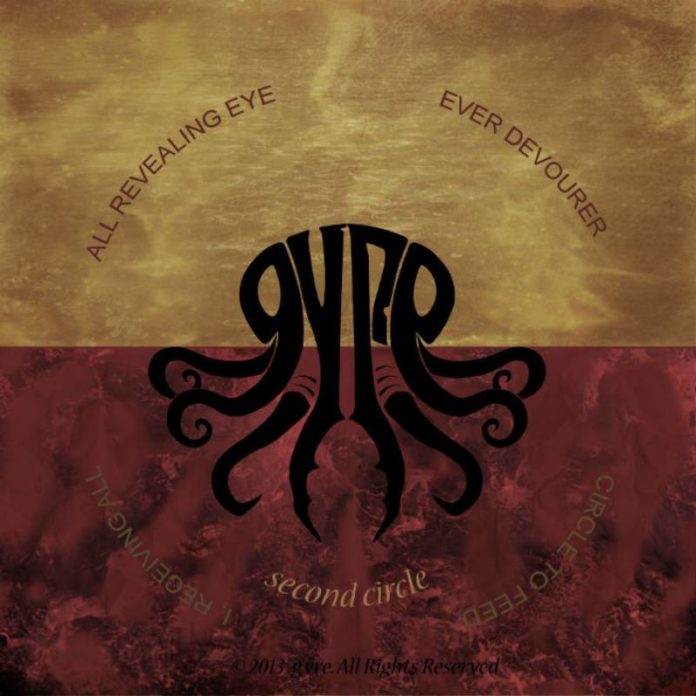 To put into words just how much a record meets our approval without coming across as obsequious or trite (or, worse still, bland) is one of the hardest tasks facing the reviewer. This is the challenge facing me today as I review New Jersey technical/groove metal band Gyre, whose second EP ‘Second Circle’ came to my attention not more than a fortnight ago.

On the basis of this record, Gyre is of that breed of groups whose music defies easy labelling, rising above any single genre. As it is the trend today, the band have been, and probably can be, most easily marked down as technical metal, but to limit them to a single musical space is to miss what makes the music of ‘Second Circle’ unique.

When listening to the EP, I was surprised by just how quickly it played. Yes, it is short – four tracks, not even 17 minutes long – but there is so much variety and intensity packed within, that the music passes by even more quickly. The first track, ‘All Revealing Eye’ sets the tone for the rest of the EP, a maelstrom of straightforward metal aggression (reminding me of Malefice) and groove/funk-inspired technical ability (I couldn’t help but hear Mastodon too, not a bad thing).

Bands who are known for moving between and beyond genres know that such an anti-formulaic formula can bring success – just ask Between the Buried and Me, probably the band around best known for this sort of approach. However, such an approach can always backfire, the music becoming too unrecognisable and too intense – as such the concept of space is always important. Knowing when to say less is as necessary as turning up the volume, something Gyre have learnt, and quickly.

Although ‘Second Circle’ is a heady experience – Gyre certainly do pack it in – each track swells and peaks, moments of quiet and moments of intensity. ‘All Revealing Eye’ certainly does this well, but the best song for me is track 3, ‘Circle to Feed’, a Mastodon-inspired sound, heavily set on groove-based riffs, underpinned by some seriously impressive basswork.

The songwriting on ‘Second Circle’ is well-aided by the excellent production, the clarity of which certainly helps with this sense of space. Each instrument comes across nicely and there is no sense of one dominant sound. Again, ‘Circle to Feed’ illustrates this well – the clean vocals sit well on top of the guitars, which still allow the bass to shine through. Such clarity of sound with music of this complexity is no mean feat, and every time I listen to the EP I hear something new. Indeed, this review would be amiss not to mention the musical ability on offer, especially in vocalist Giovannie Jeckler’s impressive range of shouts, growls and clean vocals, and the independent voice of bassist Chirag Bhatt.

This is the first 5 star review I’ve ever given, for two simple facts. Firstly, although I’ve gone through the EP about fifteen times now, I’m not yet bored of it, and I know that – unlike many other albums I’ve reviewed – I’ll come back to it once this is published. Second, and importantly, this record deserves 5 stars on the basis that the only fault I can find with it is the clichéd ‘it’s too short’. Of course, this is no real fault – this is only an extended play, after all. However, this raises the question – can Gyre reproduce this form over twelve tracks, rather than four? They’ve certainly proven they can handle the shorter format. If they keep up this level of quality then their full-length debut will definitely be something to watch out for.