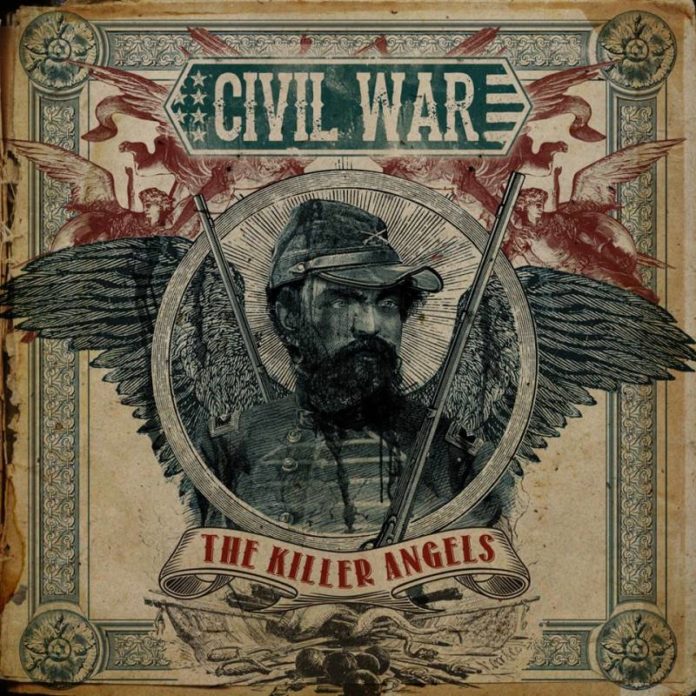 I’ve got to admit, I liked Civil War‘s new album Killer Angels more than I thought I would. There’s a certain characteristic to it that is hard to pin down: its classic sounding Maiden-esc riffs paired with modern-production might not sound that unique to anyone reading this. Sure, there are tons of bands that probably do that – but what makes Killer Angels better than a lot of those other albums is how effortlessly they seem to pull it all off.

Soaring vocals and galloping riffs take center stage on Killer Angels, and for good reason. The vocals fit the music perfectly. They aren’t overwrought or too over the top in any way – this isn’t really a power metal album anyway. It’s actually a little frightening how quickly the chorus of “Saint Patrick’s Day” got stuck in my head. It becomes clear about halfway through your first listen of the album that Civil War posses some great song writing skills. The opening one-two punch of “King of the Sun” and “First to Fight” is among one of the best sequences I’ve heard in some time. Any doubt that I wouldn’t enjoy this album (I’m not usually a fan of this genre of metal, but I’m open to giving anything a listen at least once because why the fuck not, right?) was instantaneously erased after those two songs.

Thankfully, the album doesn’t slow down too much after that. Even better, when it does the songs are still catchy as hell. “Rome is Falling” helps break up the straight-shot momentum that builds up over the first few songs, bringing the pace down a bit masterfully. Oh, and it’s also catchy as fuck just like almost every other song. The combination of higher-pitched (done tastefully, not in a way that makes it look like he’s trying to show off) vocals with the almost methodic-like delivery just really hits the spot. The pacing on Killer Angels is definitely helped by the fact that most of the songs are really good. When almost all of your songs are this good, it suddenly doesn’t matter as much where those songs are placed in relation to each other (except in obvious cases, like a concept album. Luckily, Killer Angels isn’t so much a concept album, as it is an album loosely tied by similar themes). There is only one or two songs that I didn’t care for – “Songs of Avalon” and “I Will Rule the Universe”. The former is unfortunately just a little too bland – compared to the rest of the album, it just doesn’t stack up. ” The latter I found too slow for my tastes – I found that Civil War worked best on Killer Angels if they kept things up-beat and moving forward at a fairly quick clip.

I briefly touched upon the production before, and I just want to mention that it’s great. The album sounds clean and clear, but it doesn’t sound sterile and metallic. The bass on the drums is noticeable without being overpowering, and the guitar tone is killer. The vocals are always front and center, but not annoyingly so. You can still hear every other instrument and what they’re doing at all times no matter how crazy things are getting.

Check out Killer Angels as soon as you get a chance. No matter what type of metal you listen to, you’ll probably end up liking it – a true testament to good song writing.