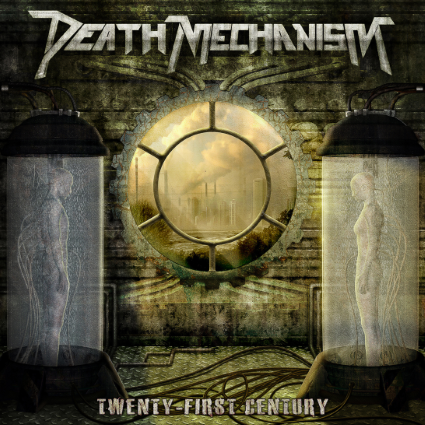 Death Mechanism hail from Verona, Italy. They like it fast and they like it fucking heavy. You’ll be hard pushed to find a thrash band on the scene with more aggression than these guys.

Probably the first thing you’ll notice upon listening to this album is the unrelenting speed inherent throughout. It’s fast as anything at the slowest of times and it’s gets faster and faster until it hurts just to think how quickly the guitarist must be picking or the drummer hitting. I’d love to catch this band live just to see how well they keep up with the tempo of the record. As a seasoned metalhead, I imagine that even my face would melt if they could hit the mark.

Sounding a little bit like Mille Petrozza on crystal meth, vocalist Pozza delivers a powerful performance with some solid structures meshing well with his vicious guitar riffing, something that is particularly evident in ‘Tipping In Front’; In fact, this song is probably the best track to start with if you’re unsure as to whether this band is for you or not. Big chugging riffs at a headbanging tempo, and even with the minimal use of some backing samples, this track is the standout song I would have picked to promote the band with.

It’s a shame that the lead guitars can’t keep with the high standard of the record. I understand that in this genre you want to be as fast and aggressive as possible, but it’s equally important to STAY IN KEY. You’ll be really getting into a track and one of these solos will come along and you’ll find yourself shuddering at them; this happens to the point that it might well ruin your enjoyment of the track and even the album as a whole, due to their regular occurrence. A bit of Skolnick or Holt would go a really long way here.

If thrash is your business then business is pretty fucking good in the Death Mechanism camp. If it’s not, then you may get a little bored, as this album can go on a bit and sometimes cross the line into monotonous. But as we all know, proper thrash is a bit of a niche genre, and if you’re a member of that demographic then I can guarantee that you’ll adore this record. It has the riffs, it has the speed and it has the harsh vocals, making it a relentless assault on your ear canals. What more could you thrashers want?