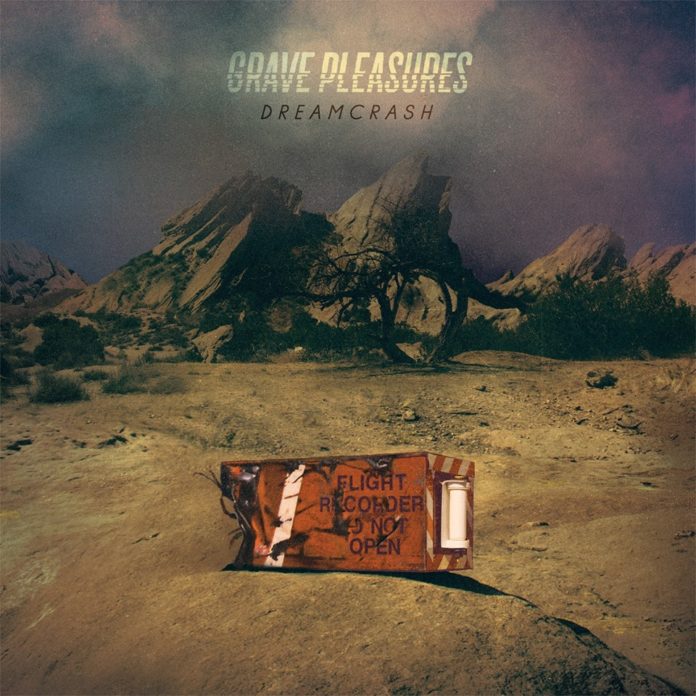 When Finnish band Beastmilk decided to have a small member change, they thought that a whole new name and a slightly different sound were needed. Ladies, gentlemen and all that’s in between, I give you: Grave Pleasures.

Now just imagine a damp squib of an apathetic fanfare.

Grave Peasures are pretty much still Beastmilk, but with a less heavy and more pop friendly sound; Beastmilk-lite, if you will.

Dreamcrash starts its self-proclaimed modern rock with “Utopian Scream,” a song which can only be referred to as modern if you just woke up from a 30-year coma. Vocalist Mat “Kvost” McNerney likes to remind us throughout the whole song that they are delivering the aural delights of horror-punk by adding vocal ornaments wherever he can crowbar them in. I was hesitant to call them ‘ornaments’ as that carries connotations of augmentation… and this is more like a forced yodeling style.

Thankfully this over the top yodeling doesn’t last too long, as it barely rears it’s ugly head in the track “New Hip Moon”, which brings the mood down with its pleasant punk-rock guitar intro. We are then treated to a basic drum-driven song which sounds like Glenn Danzig has committed some horrific crime and sentenced to join forces with the White Stripes.

Throughout Dreamcrash it is evident that Grave Pleasures have made a conscious decision to ditch their heavier Beastmilk roots in favour of a more pop-friendly sound, as shown by their catchy Brit-rock sounding melodies. I’m not complaining; I love a good dance, and I also love a bit of call and answer, which “Futureshock” delivers with bells on.

Halfway through Dreamcrash, we are treated to the ballad-esque “Crisis.” The yodelling is back, but it’s far more controlled. Bassist Valtteri Arino also decides to get a little more adventurous with his bass melodies, which is very welcome. Although a different style to the rest of the album, “Crisis” is a personal favourite and I would consider it the strongest track.

Another example of Kvost’s vocals being on-point appears in “Girl in a Vortex.” It seems that he has stronger performances when it comes to the lighter songs. There is less of a  forced narration sound to his voice and more room to appreciate the finer singing style.

Variation is the album’s strongest point. No two songs sound alike, which is definitely a rare occurrence in the horror-punk genre. Song order seems to be a bit messy, but once you get past the early tracks, Dreamcrash becomes a very listenable album.

Although they may lose a few Beastmilk fans, Grave Pleasures bridge the genres of horror-punk and Brit-rock so successfully that they are sure to gain a wide audience with this release.

IN A NUTSHELL
Although it takes a few songs to appreciate, Dreamcrash is a varied album in which no two songs sound alike. A broad range of genres will also appeal to a variety of music fans
POSITIVES
A very varied album, which sets it apart from most others within the genre. The catchy pop rock melodies are always a treat in the songs.
NEGATIVES
Kvost's vocal style is generally over the top and forced. The track order lets the album down by setting the wrong tone early on.
4