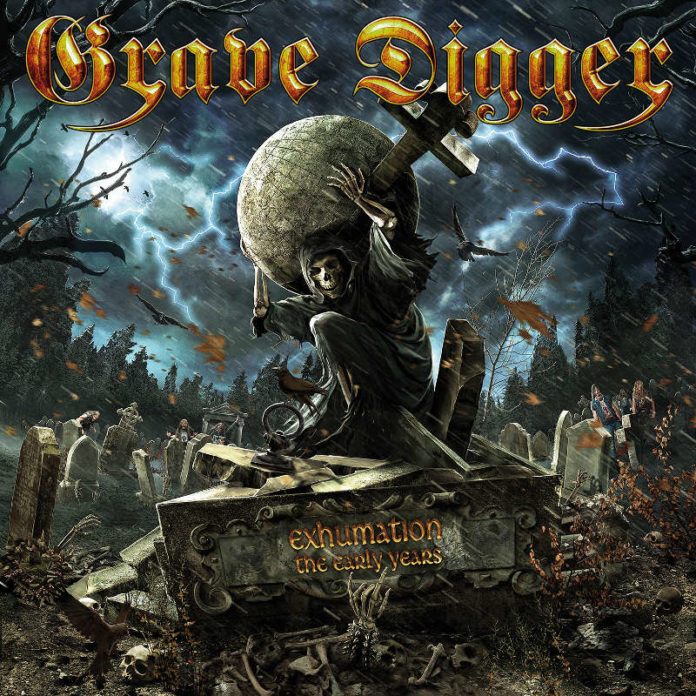 Dating back to 1980 (though their first album didn’t arrive until ’84), Grave Digger have maintained a steady clip of releases, not couting their ’86-’93 hiatus. Having stuck with Napalm Records for their last five albums, they seem comfortable enough there to go ahead and release this compilation covering material from their ’80s era, even including one track from Stronger Than Ever (with its memorable cover art of a cybernetic Donald Duck), seemingly the only one of these albums that didn’t get a non-bootleg reissue recently.

Landing pretty squarely in that ’80s sort of proto-thrash, the songs batter away with drum-beats and quick-pick chugging, while the vocalist wails away about headbanging, the need to rock, explosions, witches, babes, and excitement. Energy outweighs technicality, landing them in the general neighborhood of English Dogs or Exciter, and while there’s not too much variation in the songs included here, the band comes off as generally having had a good time making the music.

The songs don’t seem to have any particular order organizing them, not even with the energy flow, so aside from a couple of bonus tracks, you could get more or less the same experience by just throwing those early albums in shuffle. Having said that, they do deserve credit for omitting any power ballads that might have been festering in the back catalog, even if they could have probably gotten away with throwing in just one towards the end.

Not having original releases of the source albums at hand, I can’t say whether any significant remastering has been done, but there’s definitely a decent clarity to the audio; what is more, that mid-range muddiness which dogged so many ’80s metal releases isn’t too offensively evident here. Though it’s quaint by today’s standards, there’s an extra kick of bass in a few of the tracks (“Heavy Metal Breakdown”’s choruses, for instance, or the main riffs of “Enola Gay – Drop The Bomb”), which give things a bit more heft as they swing low, and the drummer often steals the show with his dedicated beatings. The music being what it is, the lyrics or their delivery may pull a few laughs, like the dramatic belting-out of “We… want to rock you! We… want to roll you!” in “We Wanna Rock You”, but there’s no way of getting away from that without being dishonest about what the band was doing in those days.

In the end, this is a release which will most likely only hold the attention of those who are already retro metal enthusiasts. Listeners only familiar with modern imitation bands may find this time-capsule mix-tape a compelling look back (and maybe even get them to listen to more old stuff, which would be a nice outcome), but there’s not a lot of (non-comedic) stand-out moments for the ones who have a passing familiarity with the genre in that era. Most unfortunately, for people going in with little to no experience with the style, it’ll probably come off as a collection of clichés they only know via second-hand MTV reductions, discouraging them too much with the first listen to make it to a second go without one of the hooks successfully lodging in their brain.

IN A NUTSHELL
A good primer on the early days of Grave Digger, but with the usual 'best of' problems
POSITIVES
Unabashed rocking, strong drumming
NEGATIVES
Cheesy lyrics, some arena rock influence, and too much simplicity at times
3.5