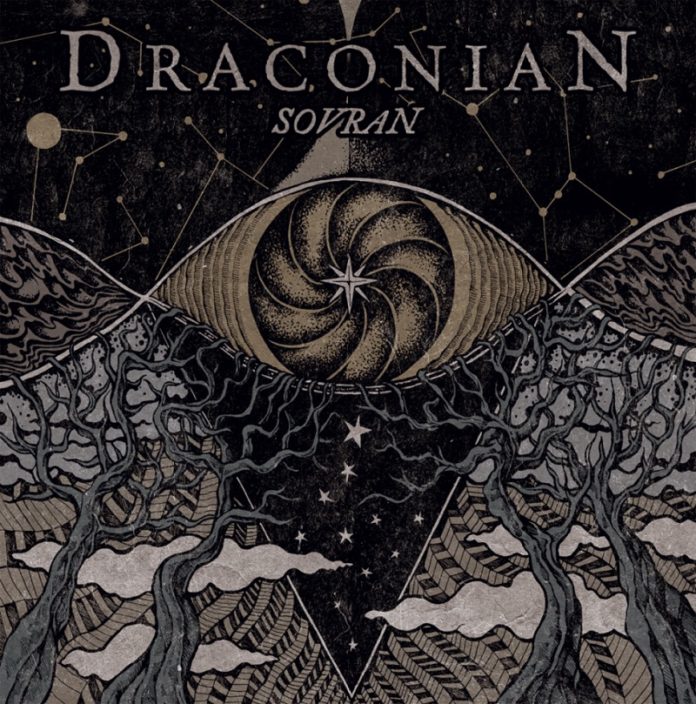 With a stretch of almost a decade between the group’s formation and the release of their debut LP in 2003, it’s easy to imagine Draconian take their song-writing seriously. Now on their sixth studio album, with an extra vocalist (Heike Langhan) and a guest appearance from Crippled Black Phoenix‘s Daniel Änghede, the careful structuring of the songs on Sovran (which I’m going to imagine, until I learn better, is pronounced ‘sovereign’) speaks to this projected sense of exacting assembly with a solid hour of luridly gothic doom metal tunes, boasting titles such as “Stellar Tombs” and “Pale Tortured Blue” to get the mood out there from the start.

Steady drum-pounding against tremolo guitar-work is contrasted with slower, more dirge-like stretches of bass-driven atmosphere, and with some symphonic strings (violas or violins, by the sound of it) brought in at a couple of points. There’s a pretty decent amount of variety going on for something with a presumable mission statement of sounding slow, heavy, and sad. Langhan‘s clear pitch provides a pleasing counterpoint to Anders Jakobsson‘s growling, which is where most traces of the band’s black metal past are still evident.

Listeners with a low tolerance for theatricality in their doom may find it a bit of a turn-off, along with the florid lyrics, but when Draconian combine their operatic inclinations with the harder material they’re capable of (as they show in “No Lonelier Star” and “Dishearten”), they deliver some of the album’s highest points; point that, let’s be frank, wouldn’t have had the same impact had the band stayed in that mode the whole time. The band pulls off a big finish with “The Marriage of Attaris”, and while its nine-minute run isn’t too large by the album’s standards, they make thorough use of its size and position to turn out a suitable summation of the album’s themes and style.

If it weren’t for lines like “You look so alive, even after you’ve died,” it would be easier to recommend Sovran without too many reservations. But little slippages like that are common enough throughout the body of the music that’s it becomes hard to ignore them. Listeners looking for something to scratch their gothy metal itch (who’ve already given Space Mirrors‘ latest release a shot) will find it fits their needs, but I’m having a hard time imagining it winning over anyone who’s on the fence about the genre. Still, it’s a respectable release, and it packs enough depth to dig in with repeated spins.

IN A NUTSHELL
Effective goth metal with light symphonic touches
POSITIVES
Commitment to atmosphere, some strong unions of weight and grace, good flow
NEGATIVES
Drags a little too much at times, goes a little silly with the melodrama

Destrage – A Means to No End