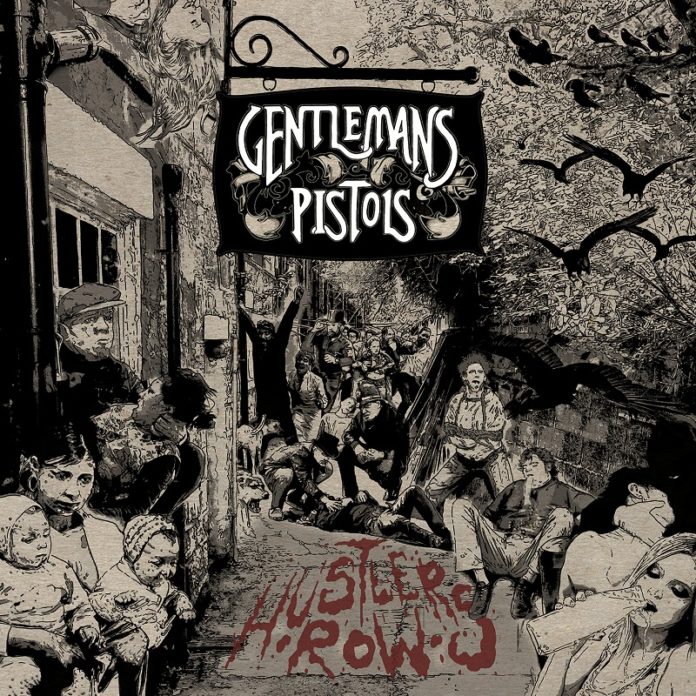 Despite forming in 2003, Gentlemans Pistols only released their debut album four years later. Now, four years after their second album, we see the release of Hustler’s Row,  is named after the street on which former guitarist, Chris Rogers lived. Although in this album the band hopes to evolve and move their sound forward while staying true to their roots and ideals, let’s take a look and see if it is worth the four year wait.

One of the most definitive features of Hustler’s Row is in the combination of retro sound with modern techniques. There is an old sensation in the guitar riffs and development of the sound, which makes listening to the album feel like tuning in to a classic rock hits radio station. While the dedication to honouring tradition could result in a stagnate performance, an attention to detail in both the tempo and the production makes for a fresh sound.

The majority of the album is done in a fairly upbeat tone with the exception of a couple of ballad-esque songs; although this lack of variety would normally put me to sleep, Hustler’s Row holds my attention by being a mean and lean performance that doesn’t overstay its welcome. This light atmosphere is established through a consistent and exceptionally smooth groove crafted by a far forward bass line. Also, the vocals occupy a middle seat in the mix taking on a supporting role by providing a rhythm through lexicon and rich high tones; true, there are a few cheesy “yeah yeah” moments, but a little cheese never hurt anybody.

The greatest strength of Hustler’s Row lies in the care put into the production and the energy Gentlemans Pistols put into their music. The mix is done in such a way that everyone gets their share of the spotlight to strut their stuff, and it’s not wasted. Every member of the band put their best foot forward to make a sound that’s great to jam and sway to and is sure to entertain. Most importantly, the songs are ordered in a logical way that transitions from slower tempos to quicker paces; the transitions are smooth as butter, demonstrating a clear thought in the construction of the album. To make matters even better, the album closes with a song that surprisingly turns the entire feel and sound of the album on its head, making for a rewarding conclusion.

Hustler’s Row demonstrates the importance of careful planning and lively energy in a performance. Even though there is not a lot of variety in the sound in terms of tone, it still manages to retain the listener’s attention through dynamic tempo and logical, well timed conclusions. Hustler’s Row is worth a play or two for anyone looking for upbeat music with old time vibes.