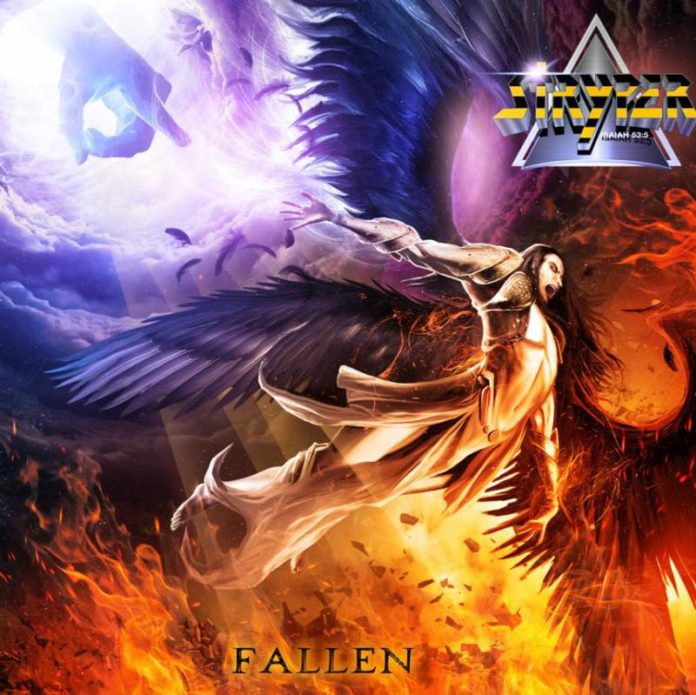 I just can’t get over how heavy Stryper have gotten over the course of their last handful of albums. While their 80s output had a habit of being far too fluffy and ballad-heavy, they’ve slowly come in to an epic, marauding power metal style that is, here on Fallen, in full blossom and ready to get heads banging.

And it’s all in the name of the lord!

That religiosity is definitely the baggage that this band will always carry with it: can a band so steeped in and famous for their religion still be a righteous metal force that even the secular punter can get their rocks off to? Well, Fallen is definitely proof that Jesus H. Christ isn’t the only saviour that Michael Sweet, Oz Fox and co. bow at the altar of.

In all honesty, I don’t think Michael Sweet has ever sounded better than he does on this album. His voice is soulful and melodic in a way that perfectly contrasts the majesty of the instrumentals. His highs soar with a mind-bending perfection over the stomping metal of songs like “Heaven” and album closer “King of Kings”. His brother, and drummer of the band, Robert, is laying down a powerful, grooving foundation all over the record as well, most noticeably on the surprise cover of Black Sabbath‘s “After Forever”, which is very, very different from the original, trading Sabbath‘s trademark melancholia for the perpetually hopeful vibes pushed by this band.

Not to be repetitive, but the fact that this isn’t the sound that these guys were going for in the 80s is still mind-blowing. I mean, they clearly had it in them what with solid gold tracks like “Soldiers Under Command” and “To Hell With The Devil” having come out in their heyday, but so much of their time was wasted on that fluff and balladry, even if, admittedly, that was exactly what was selling at the time. So much of that stuff though is so saccharine sweet, even by the standards of most power ballads, that it just ruins their records. Here in the 21st century, it’s amazing to hear this band kill with power in a way we always knew they could: Oz throwing down solos like those in the title-track, Michael screaming at the top of his lungs around the 2:50 mark in “The Calling.” It’s all power.

All-in-all this is a remarkably well put together album. While I wouldn’t say it is the best thing I’ve heard this year, there is nothing here that I could really complain about. Everything is where it should be, nothing is offensive, no space is wasted, it’s just a well rounded, heavy, headbanging power metal record. And there is nothing wrong with that at all.

IN A NUTSHELL
It won't blow your mind, but it is definitely worth your money if you're in the market for some high-caliber power metal majesty. Doesn't matter which god you worship.
POSITIVES
Very well put together on all fronts; Michael Sweet sounds awesome; Stryper is tapping in to the potential we all knew they had since the beginning of their careers.
NEGATIVES
n/a
4

Holy Knights – Between Daylight and Pain