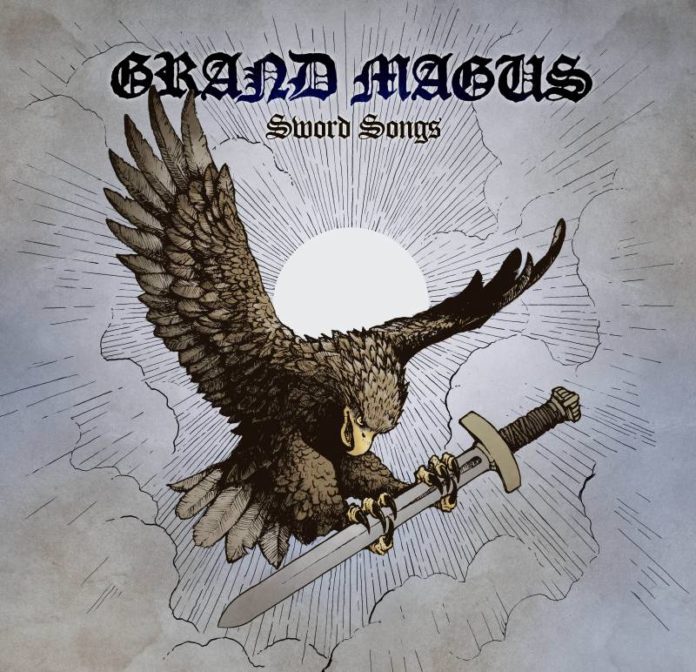 Judas Priest playing Black Sabbath covers dressed as Vikings. That’s how I would describe Grand Magus to people curious about their record at my old job. While I haven’t ALWAYS been a fan of these Swedish warriors, 2014’s Triumph and Power succeeded in making me go back and re-examine their previous output and discover just how damn good their records are.

I was freakishly excited to get their new album and experience some of the things they’d put themselves on over the course their last few albums: injecting over the top Manowar cheese and chest-beating in to their bass drenched, sabbatherian sound. It still works beautifully, even when things get ridiculously cheesy, like “Forged in Iron – Crowned in Steel”, repeating the words “Viking Metal” over and over. it is actually one of the most compelling moments on the record, the pounding chant contrasting with the speed riffing during the verses so sublimely that even the most jaded headbanger will be pounding their fists and screaming along.

JB is still very much JB at the mic, but he has added an extra groove and charisma to his voice, giving each performance even more for the listener to dive into. The man is a storyteller, and the way in which he can bring in both the flavours of Nordic history, as well as those of metal’s history, with each turn of phrase, is frankly astounding. His guitar work is also on point, throwing a number of shapes that are new to the Grand Magus repertoire; this include touches of chilly, blackened riffage, as displayed in flashes on “Master of the Land”.

One thing that the band has apparently left behind is the acoustic guitar and gregorian chant interludes from their last record. While some may miss them, I honestly think that, while they worked well and made Triumph and Power the album it was, there is already so much going on through Sword Songs that attempting to replicate these same textures would have made the proceedings this time seem bloated and unwieldy. I’ve always held that the best songwriters in metal know when to show restraint, and there is restraint and strength all over the place here.

Produced beautifully, performed incredibly, Sword Songs is, without even the slightest shred of a doubt, another blazing triumph for these burly, mighty Swedes. The fact that this band somehow isn’t huge is a testament to the poor taste of countless thousands of music fans. Buy or die for anyone with the strength to slay their enemies and defeat their demons.

IN A NUTSHELL
Incredible. Simply incredible. I'm going to buy my copy right now. You should too!
POSITIVES
Produced and performed beautifully
JB continues to improve and impress as a vocalist and lyricist.
NEGATIVES
It'll probably be a full two years until the next Grand Magus album.
5

Deicide – In The Minds of Evil