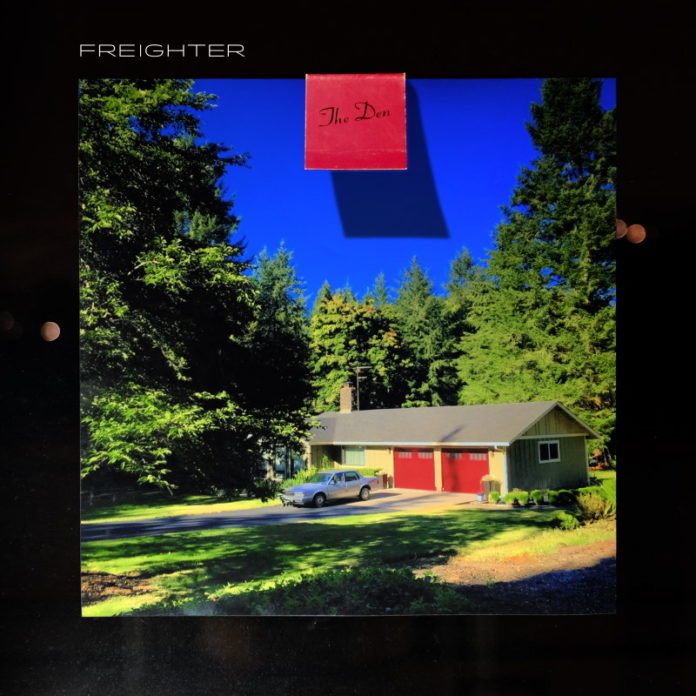 After a decade-long hiatus, the trio of Freighter are now delivering thrash with a techy, proggish inclination. If your first thoughts are that this is a weird combination, you’re not wrong. Fusing the primal (and often alcohol-fueled) headbanging of thrash with mathrock’s stiff precision and nerdiness seem like an oil and water mix…and yet, for the most part, Freighter make it work.

Opening with the retro-tinged freakout of “Psychic Reading ’94”, they crunch and spasm their way through noodly solos, into staccato chop chords, and past hammering drum runs. In some ways, it feels like several grindcore-length songs stapled together, but despite the awkwardness and persistent efforts to break up any flow that might develop, it’s kind of groovy. That could be due to the technical talent that’s being showcased, its fragmentary form notwithstanding; having said that, the attitude, with hints of playfulness and intimations that they aren’t taking themselves too seriously, are due some credit as well. In the dervishes of rhythm, the unannounced introduction of a piano furiously keeping pace with the drum’s counter-beats, and then jumping to almost country-western tone for the guitar, among other touches (like the appearance of a xylophone in the last song), there’s a strong sense of the band working to make sure that their music never gets dull, predictable, or easy to pin down.

Complexity notwithstanding, the band does find room for some… well, not exactly groovers, but comparatively easier-to-follow tunes, which would let you bang your head for more than six seconds before the rhythm gets flipped. “King Pigeon” is probably the best example in this regard, with a starting bass-line that demonstrates some fierce auditory pull. It’s sort of like fast-forwarding through a Don Caballero CD. At just under half an hour, it’s tempting to call this an EP, but the variety and intensity (which, to be frank, gets genuinely exhausting even at this run-time) are enough to push it over. And, as busy as it is, you’ll certainly get your money’s worth if you’re the sort to go back and try to pick out details you didn’t catch the first few times through.

THE BOTTOM LINE
A challengingly fun album, and as a comeback offering, one that should serve to solidly convince listeners that the band's still got it.
Reader Rating0 Votes
POSITIVES
Intense performances
Impressive technical skill
Strong interplay
Cool attitude
NEGATIVES
The ADD nature of the songs can be off-putting
The jumbled nature of the songs can lead to a sense of repetition even when the songs are actually doing drastically different things
4