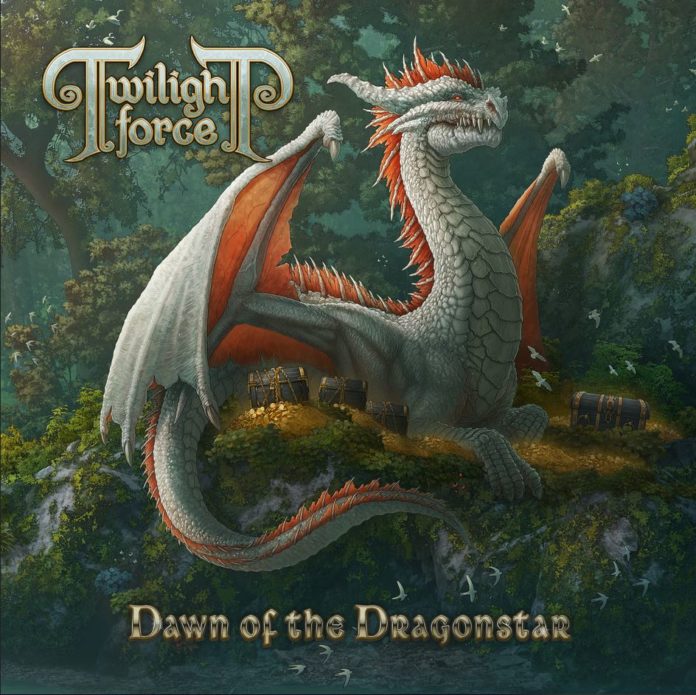 Because of how campy power metal can be, there are many bands who, despite their sound, try to distance themselves from it. They fear that such a label might make people take them less seriously, thinking that they’re all about dragons, wizards, and coats of armor. Parallel to those who don’t want to be boxed in, there are bands that turn every stereotype up to 11, and who fully embrace everything that power and epic metal are all about. That’s where we find Twilight Force.

Dawn of the Dragonstar finds Twilight Force with a new singer, as Alessandro Conti (“Allyon”) has taken the place of Christian Eriksson (“Chrileon”), who left the band in 2017. Changing a singer is never easy, and fans often fear that a change in vocals can damage the band’s identity. Luckily for them, Alessando Conti is not only able to match the skills of Eriksson (who was a talented singer in his own right) but, in fact, manages to surpass them. Indeed, Conti‘s voice really seems to be made for this type of music, exhibiting a range that works perfectly with the kind of storytelling that Twilight Force are all about.

The departure of Eriksson does not seem to have seriously affected the songwriting, as trhe songs retain the same kind of epic flair that previous albums exhibited. They continue to find their inspiration in classics sounds of the fantasy genre, such as video games and Saturday Morning cartoons. For example, “Thundersword” has overt musical references to the classic He-Man cartoons, while sections of the 12-minute epic of “Blade of Immortal Steel” bring to mind the works of composer Nobuo Uematsu, responsible for a good chunk of the music used in the Final Fantasy video-game series. This is no surprise, as Twilight Force really seem to be all about creating a completely over-the-top “epic” feel with their music, and video games and cartoons are probably the best material to take ideas from.

Dawn of the Dragonstar is a fantastic album that, more often than not, kept me tapping my feet as I listened to it (and I’ve done it quite a few times already!). Alessandro Conti‘s experience in bands like Trick or Treat have definitely made him a very skilled singer, and his talents are proven beyond any doubt in this release. While anybody who’s iffy about power metal should probably stay clear from this release, fans of the genre simply can’t get their hands on it fast enough.

Reader Rating2 Votes
Alessandro Conti really shines as TF's new singer
The feel of "epicness" conveyed by the music is out of this world
The fantasy elements do not work against the heavy metal aspects, as most songs keep you just want to headbang (and slay dragons)
The finale could have been shorter
4.5