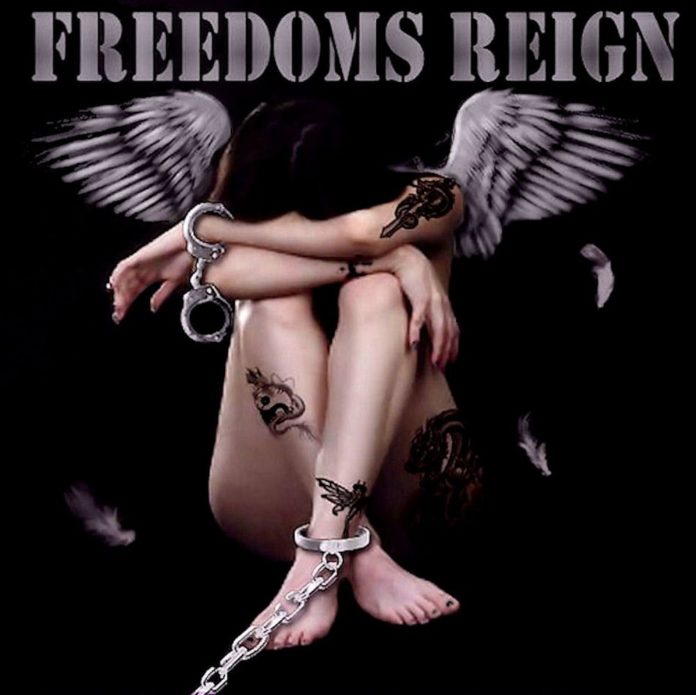 Every once in a while, an album comes along that seems like it couldn’t possibly work. An amalgamation of influences so disparate that you might think that there’s no possible way that it could come together into one cohesive work, and fear that it will instead simply collapse under its own weight. That’s exactly what Freedoms Reign has accomplished: they’ve taken Hard Rock, 80s style Power Metal, flashes of Prog, Nu-Metal, Grunge and Thrash, and made a cohesive Heavy Metal album that works.

Vocalist and lead guitarist Victor Arduini was a founding member of Connecticut Prog Metal legends Fates Warning, and their signature sound does crop up in some places (usually in the guitar work) but is far from the whole story. From the opening track, “Ritual”, one can draw both comparisons and discrepancies with that illustrious band. The playing is fast and vaguely thrashy, much like that old FW material, but the vocals are reserved compared to that band and remind one of Prong’s Tommy Victor crossed with Ozzy circa Sabotage. They fit the songs surprisingly well and are complemented by some outstanding, inventive drum work and solid, occasionally shredly leads.

Influences are pulled from all over the Metal sphere, as is demonstrated by “Up from Down”. The track is total Sabbath worship, and the following track “To Be” even shifts gears into an Alice in Chains mindset. The production reflects these influences also, sounding almost exactly like those early AiC albums, which in their own right sounded like mid-seventies Sabbath.

You might have noticed how many other bands and styles I’ve referenced here. This is both the album’s strength and weakness: On the one hand, the fact that they’ve taken influence from so many different corners and styles and made them fit together is remarkable, and is an interesting case study on the overarching Hard Rock genre. It also, however, leaves the album feeling at times as if it’s lacking an identity of its own.

If you’re looking for something different, this may not be the album for you. At the end of the day though, if you love your traditional Heavy Metal, and you have at least a passing knowledge and enjoyment of Hard Rock as a whole, then Freedoms Reign is definitely worth your time.