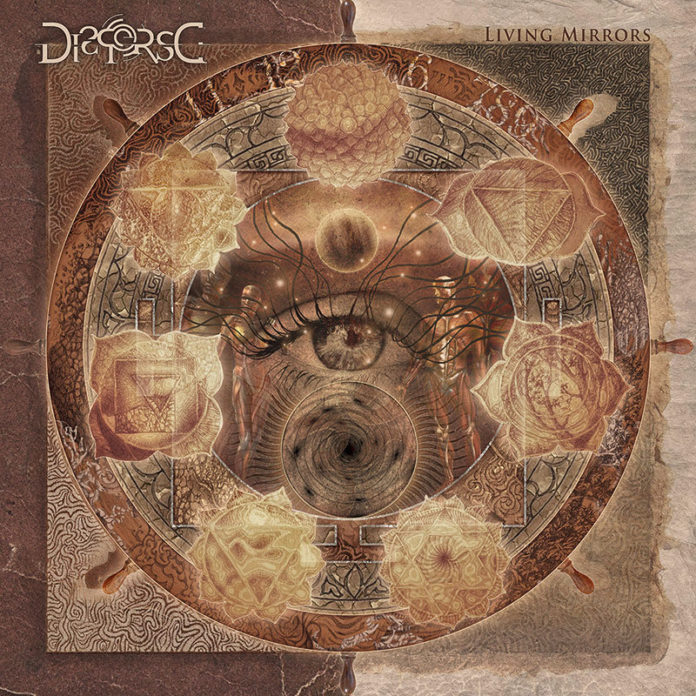 As both a maker and aficionado of progressive metal, it’s hard to make a blanket statement on the state of the genre. On one hand, you have legions of djent bands aping Meshuggah, which is in and of itself a waste of effort (you’ll never eclipse the masters), and dragging down a proud genre into the depths of –core falseness. On the other, you have legitimate new talents pushing things forward like Cloudkicker and Intronaut who create interesting, compelling new sounds. But where does that leave the classical approach to the genre pioneered by bands like Fates Warning, Watchtower and Dream Theater? Rather than mindlessly recycling the past (as so many retro bands do these days), Disperse take the high road and blend it with the future on their album Living Mirrors. The effect is somewhat uneven in practice, but there are certainly a number of inspired moments.

Fortunately for the Polish four-piece, they lead with one of their strongest tracks, “Dancing with Endless Love”. Its layers of acoustic guitar, piano and ambient electronica set the stage perfectly and give the listener an idea of what to expect from this album: the interplay between keys and guitar as a focal point. “Enigma of Abode” is the first proper tune, and we get a taste of what Disperse are about – a combination of djenty percussive riffs, purely clean singing and guitar acrobatics. The dazzling sweeps by guitarist Jakub Zytecki are Disperse’s ace in the hole; he fearlessly (and shamelessly) leads the charge for vocalist Rafal Biernacki and his keys to weave melodic lines and backing layers. “Profane the Ground” has a kind of Liquid Tension Experiment meets Chimp Spanner vibe, except with vocals over the top. “Message from Atlantis” might be my favorite track on the record, though – its airy electronic elements and evenly-paced drumming support the vocal line perfectly, and Zytecki manages to rein himself in until he provides a catchy solo full of hooks at the end that recalls Animals as Leaders.

I do have a few criticisms. While the rest of the record does a decent job of keeping up the momentum, it’s largely lacking the standout moments of its first half. While Disperse are able to maintain the old-meets-new sound they’ve established for themselves, they’d be better served by a greater abundance of hooks. Also I found the production somewhat lacking; the instruments sounded packed together towards the center. More breathing room would do wonders for Disperse in the future. Finally, while Biernacki’s vocals are strong, it sometimes felt like there wasn’t much to his vocal parts – it seemed like he was just sort of singing along rather than being the focal point of the music as the frontman. He’s got a great voice, he could be great if he isn’t afraid to show off what he can really do.

I don’t mean to pile on Disperse, though. Overall, Living Mirrors is a strong record with the beginnings of a strong voice shining through.They have the tools and the talent; a more clear vision and a little more bravery could launch these guys into the stratosphere.