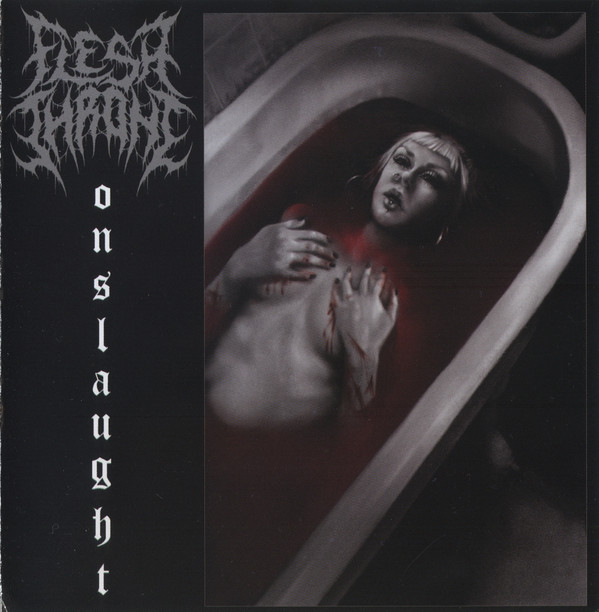 Flesh Throne is a band that I was completely unfamiliar with until I heard latest Kraanium album, “Post Mortal Coital Fixation“.  “What does the new Kraanium album have to do with Flesh Throne,” you might ask me.  Well, Lou Martinez (vocals; ex-Vomitous) was gracious enough to do guest vocals on ‘Sculptures of Perverse Suffering’ and he sounded incredible.  It is because of that brief introduction of guttural decimation that I knew it was time for me to get acquainted with the group known as Flesh Throne, and now here I sit with their 2011 EP, “Onslaught“.

I’ll admit that when I first played ‘Unmerciful Remedies’, I was a little surprised by what I was hearing.  Here I was expecting brutal death metal, when instead I am met with Satanic death metal with brutal slam and hardcore tendencies.  You can definitely hear the east coast death metal influences like Pyrexia, older Dying Fetus, and Internal Bleeding mixed into their violent nature.  While those aforementioned bands may have done this style before in their own ways, Flesh Throne is more than capable of taking those influences and spinning them in their own unique way.

To add to the identity of “Onslaught“, each track either starts or ends with a sound byte of Gaahl (God Seed, Wardruna, ex-Gorgoroth) in the now infamous interview he did for Metal: A Headbanger’s Journey.  Not only that, but Livio Wellinger (Bodysnatch) and Hidenori Sato (Infernal Revulsion) do guest vocals on ‘Unmerciful Remedies’ and ‘Wounds Of Annihilation’.  It is because of this fact that Flesh Throne had created not only a dark slab of death metal that was heavy, exciting, and memorable, but was able to appeal to such a wide array of fans in the world of extreme death metal.

While “Onslaught” may only have three tracks, they are amazing from beginning to end.  There is just something about the way Flesh Throne presented their material that makes me want to keep on listening.  If you are a fan of depressing death metal/hardcore, you would be a fool not to give Flesh Throne a chance.