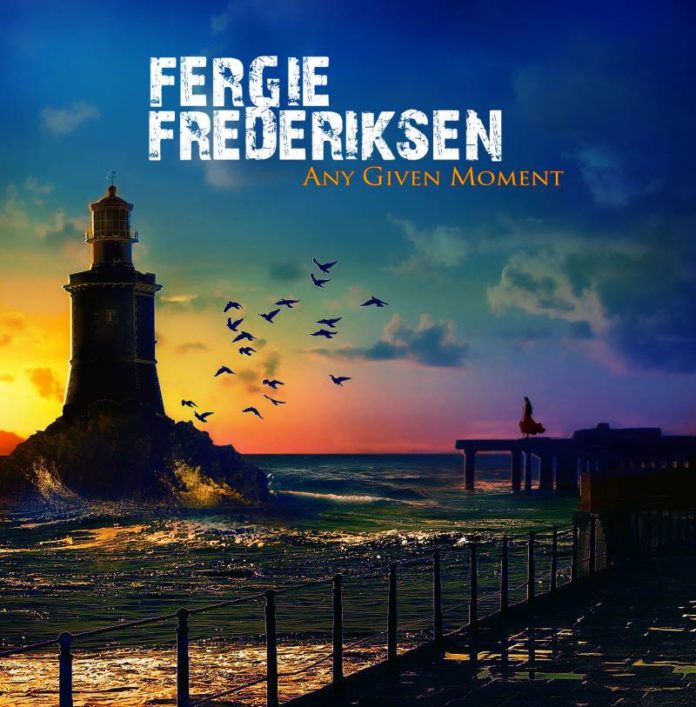 When I first stumbled upon the promo release of the album, I knew that the singer’s name had a familiar ring. Although I’m ashamed to admit that the first person that popped to mind was the (arguably) dashing female pop performer, I soon realized who Dennis “Fergie” Frederiksen really was: the voice of legendary acts such as TOTO, Le Roux or Angel, as well as an established solo performer.

Any Given Moment has a strong late 70’s and early-to-mid 80’s feel to it, the music being a great retrospective of this golden era for melodic rock, with a few dashes of progressive rock elements mostly audible through the amazing keyboard performance. The piano and the guitars provide a leading force, paving a way for Fergie’s brilliant vocal performance, evident in tracks such as “Let Go” or “Time Will Change”. The album keeps a constant mid-tempo pace with a lot of power ballads in between, which really bring out the best of Fergie’s passion and power, most notably in “How Many Roads” and “I’ll Be The One.”

While I’ve always kept a dose of healthy skepticism regarding solo albums, I must admit that Any Given Moment might have convinced me to let go of these stereotypes I’ve been nurturing for so long, at least this one time. The main reason for that is that, unlike what I’ve been used to expecting, the music is not merely a foundation for the singer to improvise upon, but a strong piece of art on it’s own as well. With amazing piano lines, moving guitar melodies and a solid foundation provided by the rhythm section, the instrumental side of the album deserves as much praise as Frederiksen’s own performance. The reason for it may be that the producer Alessandro Del Vecchio brought out the best of both Frederiksen and the myriad of guest musicians, including Bruce Gaitsch (Richard Marx) and Robert Sall (Work of Art, W.E.T.) as well as the talented Norwegian singer, Issa Oversveen, performing along with Fergie Frederiksen on the album’s highlight track: “Not Alone.”

Despite being a fairly interesting record, Any Given Moment simply simply feels out of time. The album feels like it came straight out of 1980’s, and bears no evidence that 30 years have passed since, which I guess could be interpreted as either a good or a bad side, depending on the individual’s taste. As much as I personally believe that a slightly more modern edge in terms of production would have made this record much more challenging for an average listener, maybe it’s the vintage feel that makes this album so passionate. Again, I believe this to be an individual thing, which would ultimately result in someone liking the record or not.

In conclusion, Any Given Moment is a solid AOR release that will take you on an emotional journey back in time. If you, for any reason, are not familiar with the talented and highly overlooked singer, this album is a perfect insight into Fergie Frederiksen’s talent, as well as a high-quality musical piece in general.