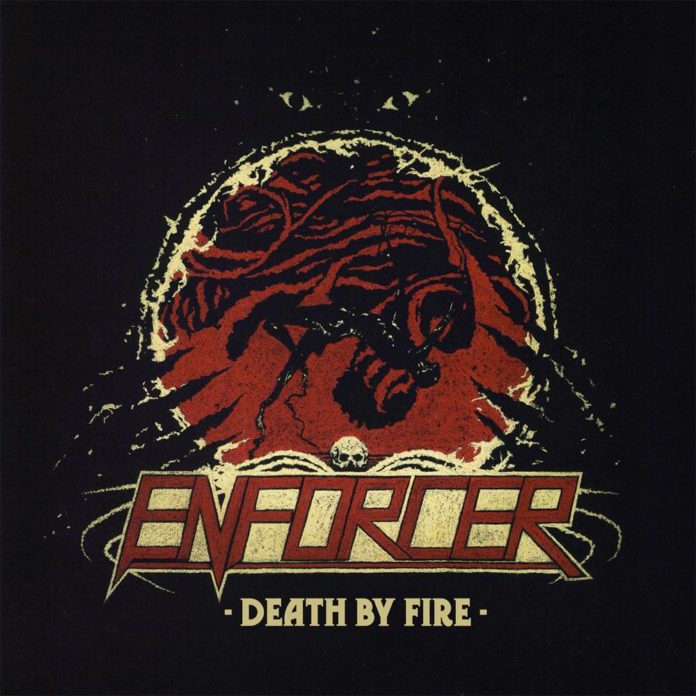 Judging by their looks, sound, cover and logo design you might be led to believe that Enforcer is one of those veteran bands that everybody’s heard about, but no one actually ever heard from. While their sound says pretty much the same, oddly enough, these guys are a relatively young act, having released only two albums prior to Death by Fire.

What’s in store for you is top-notch Speed Metal sound laced with some Thrash Metal, Heavy Metal, and even some early Scorpions influences. The variety of their sound is demonstrated in tracks with strong Hard Rock influence and sensibility, like “Take me out of this Nightmare,”, standing side by side with bombastic Speed Metal tunes, such as “Mesmerized by Fire.” The guitar work is handled exceptionally well, with both guitarists giving their best when it comes to rapid-fire riffs and shredding solos. The refreshing thing is that the songs are not constituted out of a single, generic riff being played over and over, but rather feature an abundance of catchy and memorable riffs running one after another. Listening to these guys really reminds me of some of the greatest names in Heavy Metal like Iron Maiden (mind the incredible instrumental piece “Crystal Suite”), Accept or Mercyful Fate, and the band is definitely aware of it, playing their cards right in invoking this feeling while at the same time sounding original rather than like a bleak copy of any of the aforementioned legends. The strongest point of the album is definitely the raw, spirited energy that makes you bang your head to every tune. Also worth mentioning is the outstanding production which captures the spirit of the 80’s, but not at the expense of the sound clarity and listening experience.

I have no doubt that had this album been released back in the 80’s, it would have been considered a cult record by now. This way, with this classic genre nearly being laid to rest, it might not receive the attention and praise it rightfully should. However, those who long for those glory days of Heavy Metal will be thrown aback with what might easily be one of the best classic Speed Metal records in the last decade.