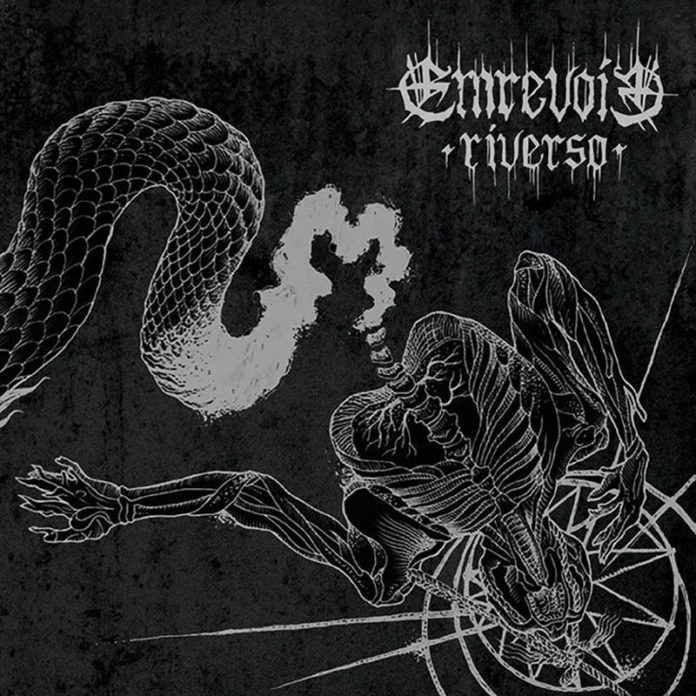 Riverso, Emrevoid’s follow-up EP to 2011’s self-titled full length, shows that Italy is still a force to be reckoned with in the heavy metalworld. Sinister black metal melodies meet intense death metal ferocity, making  for a truly intense listening experience. Gaetano Rizzo’s vocals show a pretty wide range of sounds, from super deep death growls, similar to those of Frank Mullen’s from Suffocation, to high pitched black metal shrieking. His vocal control is impressive, and serves the often schizophrenic nature of the music, which bounces back and forth from death to black metal pretty seamlessly.

One exception is the album opener, “Patibolo,” which starts out with a pretty menacing black metal vibe, before going into a choppy, almost deathcore-like vibe. The transition is pretty clunky, it actually feels a little forced, and the song never really recovers; thankfully, though, this is the only bump in the road, as the rest of the album is executed with precision. “Mostro”, for example, despite being a short song (it clocks in at just over a minute and a half), serves as a sampler for the album; the music is fast and brutal, but with an unsettling and chaotic atmosphere, reminiscent of Deathspell Omega, though a little less technical.

The production is top-notch for this particular brand of metal; there’s a big emphasis on guitars and vocals, but there’s still plenty of the rhythm section in the mix too, which accents the heaviness. There’s a slight echo effect to everything, which gives Riverso a distinctly black metal tone, and provides an eerie atmosphere to the music. Emrevoid have created a pretty impressive record, and will certainly have a lot of blackened death fans salivating. Although the first track is a misstep, the rest of the album more than makes up for it.