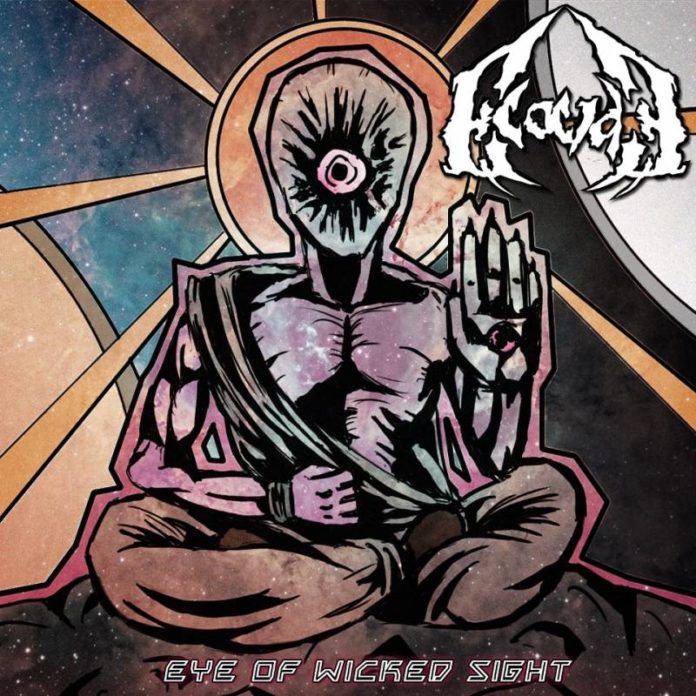 I’ll be the first to admit that I had never heard of Dutch outfit Ecocide when I was first handed their debut effort, ‘Eye of Wicked Sight’. Independently released, there isn’t that much information about the band out there, but what I could find was enough to catch my eye. Described alternately on their Facebook page as ‘oldschool’ death metal and ‘Sci-Fi’ death, I really didn’t know what to expect. What I quickly discovered, however, was that there is so much more to Ecocide than these two descriptions suggest.

The most remarkable thing about ‘Eye of Wicked Sight’ is just how quietly subversive and progressive it is. Here I use the term ‘progressive’ in its true sense – even though this album is a homage to traditional death, it never once sounds predictable, jaded or dull.

The progressive character of ‘Eye of Wicked Sight’ is most immediately noticeable in the sampled openings to ‘Terror from Beyond’ and ‘Alien Intervention’, pushing the record into concept album territory. Even more remarkable is the bizarro synth-laden quirk of an introductory track, ‘Multiverse’, which would not feel out of place in Jeff Wayne’s ‘The War of the Worlds’. I for one have never heard an album advertised as death metal that opened in such a way.

More impressive, however, is the nature of Ecocide’s songwriting. To write brutal metal, especially death metal, and especially emulating classic death, as this album does, is a fine skill to master – all too often a brutal sound is achieved, but with the end result of monotony… but not here. ’Eye of Wicked Sight’ is an album that catches the ear from the outset and only grows from there (testament to this fact is that as I sit here, writing and listening, my rating for the record only improves). Before becoming Ecocide, the band were a thrash metal act known as Toxic Napalm, and although the name has changed, much of the thrash influence remains. Indeed, what marks Ecocide apart to my ears is the emphasis they place on the melodic, in their grooves, riffs and breakdowns. As a result the band pass the test – this is a brutal record which does not suffer from monotony; far from it.

The catchy, thrashy aspect is so prominent throughout the record that it’s worth forgetting the monicker of ‘oldschool’ death metal. Particularly noteworthy moments include the main riff to the first full song ‘Planet Eater’, a lumbering, chunky groove, and the Slayer-esque riff/breakdown to the succeeding track, ‘Alien Intervention’, but these are only two such instances – like I said, the thrash influence is heard everywhere (listen also to the end of ‘Crawling in the Crypt’, another great thrash breakdown riff, veering from chaos to melodic and back again).

The more I listen to this record, the more there is to hear, to me one of the clearer signs of a strong album. Personally, I find it hard to mark this down on any points, apart from, perhaps, the length (33m) or production, which is only occasionally too bass-heavy and muddy. That said, who’s to complain that an album is too short? And considering that it’s an independent release, the production’s actually quite impressive.

Even though this is their debut album, and even though Ecocide have not yet been picked up by a label (although I can’t see why) ‘Eye of Wicked Sight’ is a thoroughly polished record, one which upholds the integrity of ‘oldschool’  death metal, whilst remaining unpredictable, always looking forward.

Give it a listen, it’ll only do you good.

Thanks a lot man for the great review – Abyssal Warfare Promotion