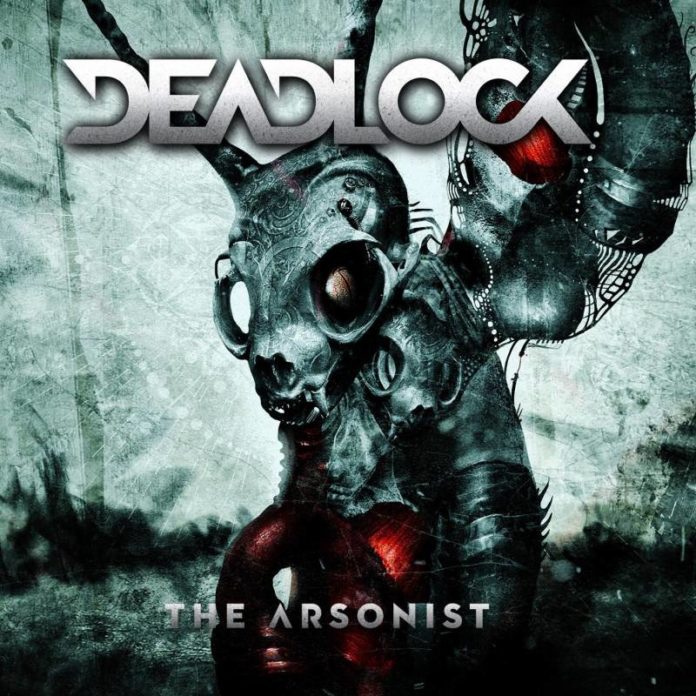 Every Metalhead sins…. Not in the sense of sacrificing hamsters in the name of Beelzebub (though it’s a legit possibility), but in hiding affection toward certain bands that might not be considered as “Trve” and “Kvlt” as what he / she usually listens to. Germany’s DEADLOCK is one of my many many sins, but I can honestly say that I enjoy their blend of modern melodic Death Metal with touch of Female Vocals and Electronic Samples. Even their live performances have always been energetic and uplifting, much like their tunes, though standing in a crowd full of 12 to 18 year old girls (and girly-looking boys) might not be an easy task to accomplish (not to mention it’s illegal).

DEADLOCK had their ups (2007’s “Wolves”) and downs (2008’s “Manifesto”) over the years, but now, with their sixth studio album, they must re-introduce themselves after the departure of their long-time male vocalist Johannes Prem back in 2011. “The Arsonist”‘s opening track delivers aggressive guitar-work and doesn’t waste any time before unleashing new vocalist John Gahlert (who played bass for the band from 2009). I had a bit of a hard-time telling the difference between the two vocalist’s growling styles, but I guess that’s for the better. Not long after, Sabine Scherer joins at the chorus with her sweet vocals, while the groove keeps on pounding. You can’t have a DEADLOCK song without a short, emotional, piano-driven break, right in the middle, and you can find it there as well. Overall, “The Great Pretender” is not a bad track to open with.

“I’m Gone” starts with some faded singing by Sabine and a militant drumming by Tobias Graf, only to become a really heavy track with a great chorus. I’m surprised that Sabine’s singing has become an integral part in DEADLOCK’s songs, since her parts were usually not in sync with the main rhythm. As for John, I’ve managed to find little nuances where his vocals were maybe heavier than those of his predecessor, but it’s just a matter of getting used to. On the other hand, what I still find hard to sustain is the band’s level of cheesiness which is not always under control. The album’s title track, as heavy as John tries to make it, is super annoying thanks to some Russian-electro-pop-influences at the chorus (please don’t ask me how I know what Russian pop sounds like!).

If we’re already discussing electronic influences, I must say that the album is lacking on that side, and it’s a shame because the band usually knew how to blend them in. Getting to number 8, “Hurt” will suffice the ballad lovers, though I still prefer some of their previous attempts, such as “Paranoia Extravaganza” from 2011’s “Bizarro World”. “The Final Storm” brings some epic moments and interesting Metalcore-ish vibes. While this could have ended the album on a high note, unfortunately there are two more songs left – one of which is a cover version to “Smalltown Boy”, originally by 80’s Synthpop artists Bronski Beat. DEADLOCK’s version is unique, much like their take on The Sister Of Mercy’s “Temple Of Love” from a few years back, but the problem is that the metal world has seen plenty of covers to this specific song – from the stellar (and most familiar) one by PARADISE LOST to the ones by ATROCITY, DELAIN and OOMPH! (who even did a version in Deutsch).

Lastly comes “My Pain” with another dose of popish influences on Sabine’s vocals, mixed with some electronic moments, background group vocals and short barks by John. Like I said, a wise song-order could have closed “The Arsonist” without a disgusted feeling, but I guess that in this day and age, it doesn’t really matter. While this album is not on the level of “Wolves” or even “Bizarro World”, it does not fail completely. John is doing a decent job as the new vocalist, Sebastian Reichl continues to deliver great melodies and awesome hooks on the guitar and Sabine sounds as sweet as ever. I could have lived without certain songs and moments, but it’s not something I didn’t expect to hear. DEADLOCK’s reign over teenagers will continue, much like our sinning as grown-ups.